I argued with myself for quite some time about building up a Soviet force for WWII, when the thought originally came to me it was for Bolt Action but now of course the force is based on something for Chain of Command, which by the time it is finished will be absolutely fine for both sets of rules. I did not make allowances for how easy these guys are to paint, when I finished my anti-tank guns I will have painted most of the infantry and heavy weapons required in three weeks. It was not my intention to be so quick as my son and I have the Scottish Corridor mini campaign to finish before setting out on the Konigsberg one. Yes, I can still find the odd figures to add and still have the tanks and assault guns to come but these can be built, primed and painted in two days tops, each one not them all obviously.

This week I have finished the heavy weapons supports, first up are an MMG, HMG and anti-tank rifle. Usually the MMG is the wheeled maxim type, for some unknown reason I chose the Warlord SG43 with a crew of engineers, I really like these figures, the gun, for me, was the usual Warlord bad fit, I had to cut down the shield to make it fit, now this could have been my fault, perhaps I put the wheels too close together, no matter it was a faff. I had the same trouble withe the HMG the DHsK 12.7mm, in fact a lot more trouble and really had to hack the shield this time, I don't take the blame for this one, the crew again were very nice. Next up was the anti-tank rifle, this base has a plastic figure kindly sent me by one of the online community (I have another waiting in the wings), I added the spotter who came with the HMG. 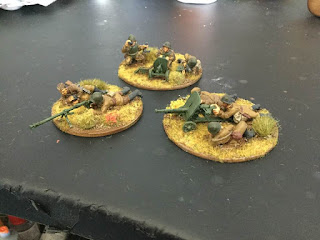 The next three bases have a 50mm mortar, a flamethrower and sniper. The flamer and mortar teams are again Warlord and have a nice chunky look about them, the snipers are female and from Bad Squiddo, nice enough but nothing spectacular, I had heard so much about these that perhaps my expectations were too high, I would have liked them in the amoeba camo suit, but you can't have everything, no matter a nice sniper group. 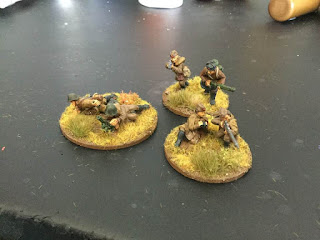 In Chain of Command a lot of crews are five instead of the normal three, I have no idea how realistic that is but if playing CoC then I needed extra figures, I went for two Artizan character packs. These have provided extra figures along with my main leader and a Commissar. I have to say only two of these look out of place and wooden, the one I mentioned in an earlier post whom I thought particularly useless I have now discovered is a dispatch rider, still won't use him. 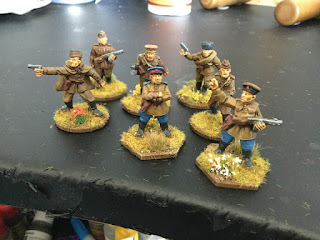 Next up the anti-tank guns, both Warlord, I got the little 45mm because I like it and I went for the 57mm Zis-2 rather than the 76mm Zis-3 because it is a better tank killer. Both guns in fact are lovely models and went together with no problems apart from my impatience and sausage fingers, the 57mm is an ugly but nice gun and has a very long barrel which also is why it is a better tank killer than the 76mm. The crews have a slightly different look to them from most of the Warlord Soviets, a bit thinner, nice enough but not the comfortably chunky look of the others, for me anyway, but they paint up fine. I do wonder though at one crewman who seems to be bringing an operational manual rather than a shell to the party. 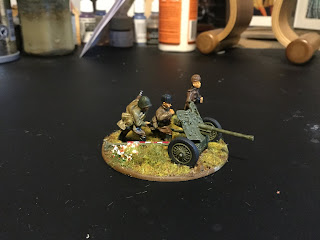 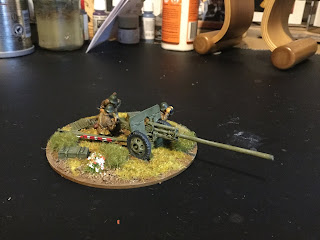 To top off my main body I got the Forward Observer and his two mates, again Warlord, the FOO himself and his buddy lying down studying the map are splendid figures. The woman with the flags I am not so sure of, if you are in the field spotting for artillery and trying to hide why bring someone with flags, it really does not make sense, anyway Ludmilla is painted and back at HQ waiting for a job or a letter to type (ouch). 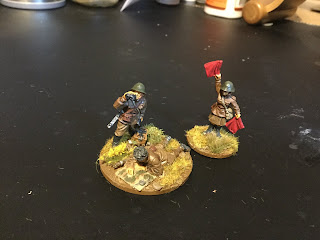 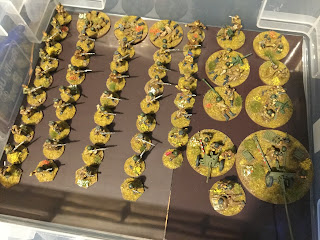 I have called a small halt to the Soviet progress because I am awaiting the arrival of Warlord's 'Last Levy' box which should get me a Hitler Youth tank killer team and a Volkssturm Squad, maybe two if the young lads get mixed in. These are required for my planned mini campaign, alright they might not get used but I have to have the option. On the tails of these will be a Russian assault engineer squad, these guys will of course be used for engineer teams and possibly as a proper assault squad at some point in the future. They were brought up to take on bunkers and fortifications, attacking which they suffered such horrendous casualties they were given armoured breastplates to wear. Offensive Miniatures offer Volkssturm and having seen pictures they look more realistic than Warlord's but they have such wooden poses I went for the more exciting 'Hollywood' look of Warlord's, more figures than I wanted and slightly more expensive but they covered all my needs from one box. I suspect in mid November I will be hearing the rumble of Soviet armour approaching. I really must slow down at some point.

Posted by George Anderson at 04:36