Buda is a Pest

After my disastrous weekend with Chain of Command I wanted a change and organised with Simon a Bolt Action game of 1,000 points for last night. I looked through the Fortress Budapest book for inspiration, there are some really good scenarios in this book but most obviously involve heavily built up areas, it was a siege after all. My terrain is all rural for the East although it could do at a pinch. No, I am not going down the ruined city path.

In the end I went for a table which had buildings around two edges bordering a large park, the park was the target for a Luftwaffe supply drop to the beleaguered garrison. Canisters would be placed at random in the park by both players, then sides were diced for, once you got within 3" of a canister a die was thrown to see what was revealed, we only managed a poor four cannisters. On move four of the game a glider would crash into the park, possibly landing on top of something or someone.

I took two German platoons supported by a sniper, flamethrower, Hetzer and PzIIIN, Simon had one platoon with an MMG, flamethrower and KV85. I do not normally take the sniper or flamethrower as I hate meeting them but hey, it was time to doll out hurt to the enemy. 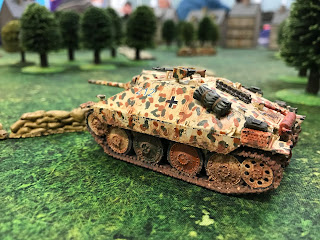 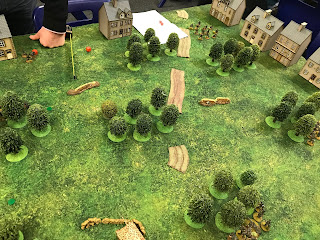 The game started and I planned to hold a couple of the small woods then make an assault when my second wave turned up. Guess what, my vehicles turned up fine but the two squads did not, the game was half way through before they decided to turn up, Simon had the same problem with his flamethrower and his tank was late allowing me to position the Hetzer to wait for it. The Hetzer fired, hit and took off some paint chips, but it did mean the tank riders had to debunk, the KV missed for most of the rest of the game. My PzIII now opened up as the Russians advanced towards the middle ground, I love this tank and the Stummel, they deal out death to infantry squads, sure enough it stopped two Soviet squads dead. The glider now turned up and crashed almost in the centre of the park, the Russians now made a move to capture the wreckage, my squad on hand to stop this refused to move and handed the game to Simon as the clock struck for time. With the help of the PzIII and an extra turn or two I might have took the middleground but it was not to be this time. 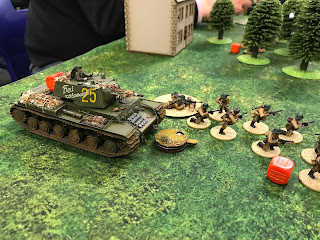 Notable points in the game was the reluctance of two of my squads to turn up when I wanted them, my sniper who had failed sniper school and my flamethrower who forgot a match. Simon had some issues as well but not as bad as mine. The canisters which had been found and opened contained small arms ammunition, food and two had Iron Crosses for the gallant defenders, a fat lot of good. Anyway although a bit rusty we had a good game and it was an interesting scenario.

I had said that 2020 was to be my terrain year, but in the last few months I have completed a lot of terrain items, most for the Eastern Front some of which at a pinch could be used in Normandy. I am not really sure what is left, hopefully I will get inspiration when the terrain book turns up. The Dacha's as I said are a bit on the small side but nice kits, the windmill is huge and it takes real care not to hit the bleedin' big arms, it may be a nightmare on the table, nevertheless it is an impressive kit. The buildings got watered coats of paint over a grey primer, the windows were painted and drybrushed separately so no big deal there. The windmill was simply grey primer drybrushed with an off white and then an olive green, I have not yet put on the sails and my not do so, we will see. 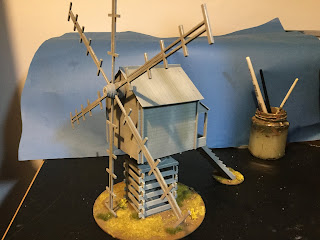 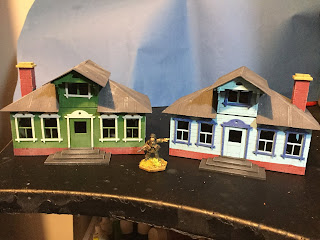 I have also finished a bunch of sandbag defences and some hasty works/barricades, the former simply painted, washed and drybrushed, the latter pretty much the same but with oil cans, metal parts etc. picked out. What now, perhaps some civilians, more low walls and trees, I got some rail track and may raise this rather than leave it as is, so maybe a signal box at some point. As for soldiers, still no idea where to go from here but whatever happens I have no plans to buy any for a month or two. 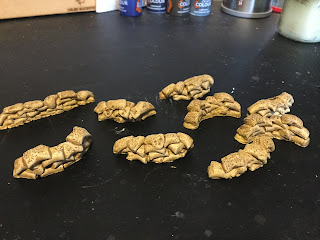 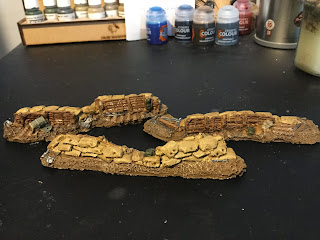 Posted by George Anderson at 10:09