I turned up at the club expecting to be playing Black Powder Napoleonics as Stuart was organising a game, I turned up to find Stuart had brought General d'Armee instead, I used to have a set of General d'Brigade deluxe edition but never played them and passed them on to a mate. It was a big game and each of us commanded five infantry battalions, two cavalry units and two gun batteries, there was a lot of nice stuff on the table. 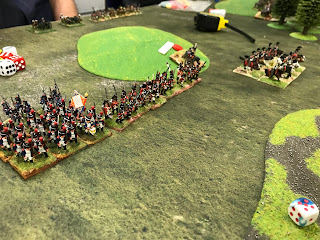 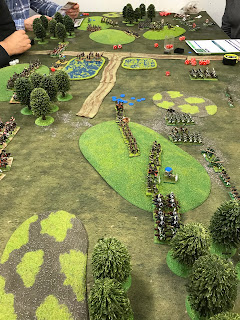 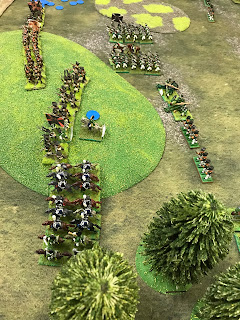 There is a fair bit of die rolling before you get to move your troops, like most games, you can muck this up and not move at all. You also roll for ADC's these are pips which allow you to do things, it completely baffled me and I never really got it. My end of the table only managed a couple of charges and not much shooting so I can't really comment on these, my opposite number, Rob, failed command rolls and didn't get moving until well in to the game, I had bad reinforcement dice and rough terrain to traverse so we didn't get very close. There was quite a bit happening at the other end of the battlefield which meant we were left on our own until we could question rulemaster Stuart. I believe the rules are popular but I cannot really say as this was a first foray.

Next week Rob is putting together a Very British Civil War type game, so probably some good fun wedded to many shabby tricks allowed to the players.

I am down to literally scraping the barrel, I have no figures to paint and to while away my time I dug out these crates and barrels and set them up for scatter terrain, I think they all came from Debris of War and I had left them so long because they are large pieces, but no point in having them in the drawer. Still undecided whether to go to Vapnartak, 60/40 for, I do have a list just in case. 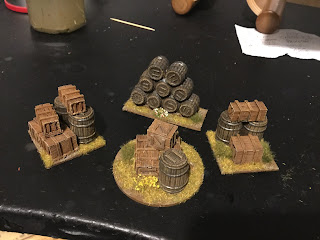 Seemingly our guest bedroom which gets used once in a blue moon is in vital need of having a ton of money spent on it and I had been totally unaware. Every time my missus gets an idea it always means I have work to do, I spent Monday night dismantling wardrobes and taking doors off to move old furniture into the back cupboard, I am sure she thinks the cupboard is the Tardis. Yesterday it was the old bed, needless to say I did not have the right spanner so I reached for my new tool and sorted the problem very quickly. The real workers have now turned up and I am hiding in the PO out of the way and doing a Pontius Pilate on the proceedings. 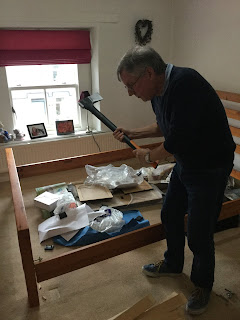 Posted by George Anderson at 08:58