The roller coaster the British had been enjoying as platoon after platoon of Jerries went into the bag finally stopped, a small wood on the main road had turned into a festung for some veteran troops who were determined to save the Fatherland. 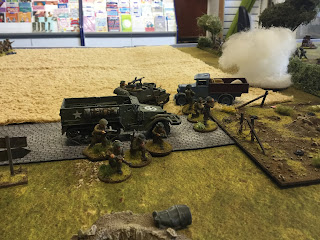 We had a fight on our hands and as half the area was alive with minefields I took an engineer section and gave them an M3 halftrack as transport, I also chose a Sherman and a Bren Carrier, the latter for machine gun support as I had a half baked idea it could run up along with the engineers. Like most British halftracks mine do not carry machine guns and are merely transports. Matt had an army platoon and in support was a 2cm Quad AA on a halftrack along with a Pak 40, four minefields cut off the solid ground and the road on the battlefield. The sodden ground on the British left could be heavy going for vehicles and they might end up bogged down if they attempted to cross. Matt's plan was to hold off for as long as possible then deploy his defenders. 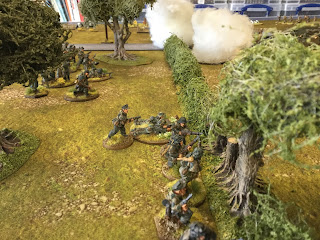 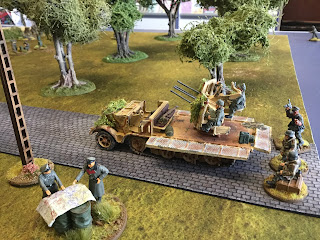 I rushed up my engineers led by the carrier, this parked at the side of the minefield on the road while the engineers debarked and got to work under cover of smoke shells, two infantry squads cautiously moved forward in support on each flank. The minefield proved particularly dense and the engineers were taking their time, the Germans now moved most of their men up to the hedge along with the Pak and a Panzerschreck team, the latter concentrated on the carrier and it took several turns before the little vehicle burst into flames. The Pak meanwhile carried on a dual with the Sherman, neither were particularly accurate. 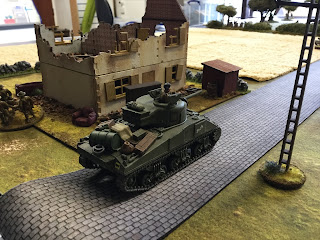 The smoke lifted and the engineers now took some heavy fire from German infantry and the 2cm Quad, so much so that very soon only two men and the Junior Leader were left to fumble with the mines. Although one German squad had lost its LMG British casualties began to mount so Colonel Bob decided to withdraw, get more help and try a different approach. 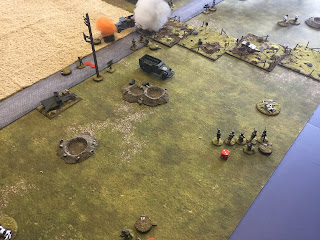 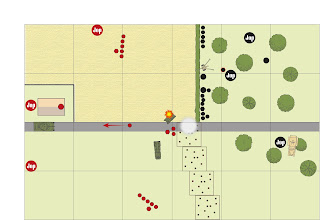 Posted by George Anderson at 19:57