Fortuna seems to have deserted me

The dust had hardly settled from the excellent Johnny Reb II game when I pitched up at the club with my War and Conquest troops, Simon had Romano-British and I had Saxon Heptarchy, I will have to experiment a bit with the Saxons as there are several lists for these early guys and I will also have to bring in my Patrician Romans for a bit of 'diversity' before the Woke crowd turn on me.

It was a small game of 2,000 points and the deployment was typical Dark Ages with a line of warriors facing each other, no cavalry this time on either side. I had Gedriht and Duguth supported by Pict and Frankish warbands along with the usual skirmishers, Simon had Comitatus, Milites and a Saxon warband with skirmishers. I got the first shots in the skirmish dual and out of 32 I got two kills, then the return fire routed one of my archer units which fled off table, it was going to return but was basically useless to me, the other one did stand against two British units but in the end it too fled, it too would return but too late in the game, not a great start.

I got a bit distracted and failed to declare my charges not judging the distance correctly, should have went to Specsavers. I suffered for this as the British assaulted my line in the next phase and I narrowly held them back, with one of my three units actually winning. Those damn Franks could not turn hits into kills and only the size of their unit and the urging from the King kept them in the fray. As the combat continued I routed one of the Milites and turned the tables on the Comitatus while the Franks managed to keep fighting although losing. With things looking good my Gedriht threw away their advantage and routed, to be followed shortly after by the useless Franks, I blame Brexit, that was my right flank gone. No matter I looked like and was winning on the left, although the Picts had charged and lost the melee I had got a Duguth unit on the Saxon mercenaries flank which should turn the tide when they charged in, nearby a second Duguth force slaughtered their opponents and with only the chance of throwing snake eyes saving the enemy...... yep, snake eyes, the British survivors would stand for one more round.

Although I manged to get my Gedriht with the King to run for safety I could not stop the survivors receiving just enough missile hits to kill the King and disperse the hearthguard, snake eyes for me was not as good as the roll for Simon. And there endeth the tale as the clock struck 10, points wise the British had snuck a victory, tactically if we had managed one more turn I think the shoe would have been on the other foot, but that's wargaming.

Back to WWII next week, Duncan has been collecting and painting some mid-war Germans so we will do an 800 point Bolt Action game and I will bring my British who don't get on to the table very often. The week after Ed has offered to take my Seleucids against the mighty Twelfth, the lads are looking forward to it.

I have went a bit mad on books recently what with Amazon and Waterstone's gift certificates. The last volume of the brilliant sci-fi series The Expanse has now been published so I could not resist, I am also watching the final TV series of the books and am wondering how on earth they can tie up all the loose ends and leave the book readers happy. I think I am just going to admit although similar they are different and so far both are terrific. 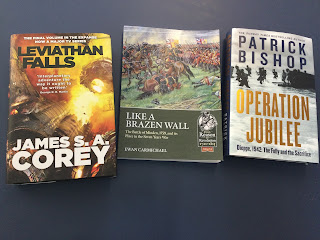 Like a Brazen Wall has been getting a lot of grand reviews and as I am on a bit of a SYW bent at the moment until my last units are done I thought it time to get something on the British involvement in Europe. I also rendered the maps for the author, a very British Major General as it happens, a nice guy and a Scot. I also spotted Operation Jubilee while surfing and I couldn't help myself but buy it, I  read a book on Dieppe years ago and visited once, having seen the ground I could only shake my head on the stupidity of the raid. 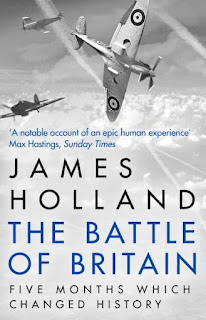 I put off picking this book up for a while as it is a beast at over 850 pages and I had just read a couple  by James Holland, also I have read a lot about the Battle of Britain over the years. Imagine my surprise to find it covers the first five months of the War and the Battle of Britain as I know it doesn't kick in until page 589. And this does not detract from the book at all, I can thoroughly recommend this as a great introduction to brave Blighty standing alone against a great evil.

Posted by George Anderson at 13:41