'Bob' Hope's second run at the hedge of death. I am not a fan of using the mortar barrage rules in this game as they can be so devastating so this time I went with a second Sherman and a pre-game barrage. The German defenders remain the same as before and as their only casualties were two men with headaches they have a full set, for the British I have brought up No. 2 Platoon giving which also gives me a full complement.

This time I thought I would use the Shermans to pound any defenders behind the hedge and force the enemy back before attempting to clear the mines. I managed to put a nice line of smoke on the front line and get both Shermans on the table, the Jerries countered with the Quad which moved to the left flank to open up from the tree line on a British squad cautiously moving along their right flank. I moved one Sherman to take out this troublesome gun and suddenly the Jerries got a double phase and it seemed right to use a command die. The smoke lifted, the panzerschreck team moved up and fired, the Pak also showed up and let loose and an infantry squad set up behind the hedge, the AT team missed but the Pak did not and up went one Sherman, I had counted on this tank brewing the Quad and then turning back to face the hedge while the pre-game barrage stopped or delayed the German deployment, but no, British morale fell, as did the Quad crew from small arms. 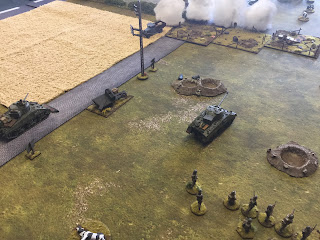 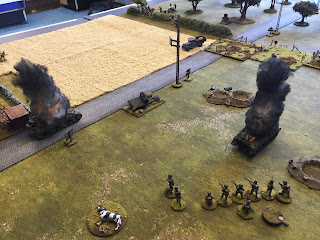 Wait, what's this, the Pak 40 suffers a build up of shock and an MG42 team are wiped out perhaps, just perhaps the pendulum has swung Hope's way, a run of phases and the Pak looks in danger of routing and shock begins to mount on the infantry. Hauptmann Krosbi turns up just in time to instill a bit of backbone into his troops and the danger passes, as does the second Sherman. My own fault, I got so carried away trying to kill the Pak I forgot the 'schreck team was behind the hedge and far more dangerous, Jerry got a one and boom.
Bob's boys however did not want to give up and a third squad along with the engineers turned up to pour fire into the hedge, but the Germans also got a third squad on and this now ensured that the British infantry were not going to clear the Hedge of Death. It would be down to No. 3 Platoon to bulldoze these pesky 'to the last man' types from the route. 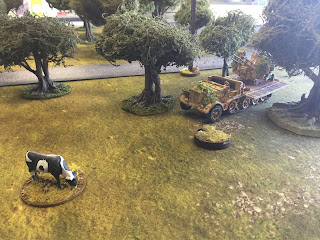 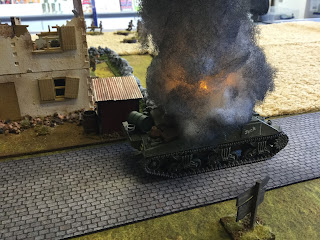 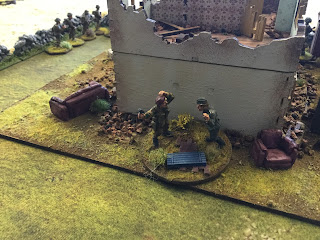 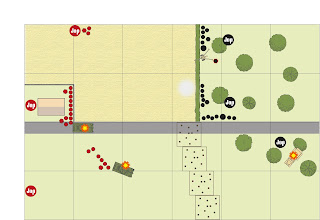 This really is an excellent defensive position, the enemy JOP's can be close to the hedge so no one needs to turn up until needed and when they do they can line the cover and shoot, the British armour has to arrive from the road or just to the right of it and this is a death trap, use smoke, yes I know but the Germans have managed to successfully disperse this on several occasions with some envious die rolling. 3 Platoon will be getting a shed load of support and will probably call in some artillery.
I have started painting the tartan on my Highlanders, I am going for a muted design, it is dark green and I think will give the desired effect when looking down, friend Rob can do tartan in several colours but I can't so the overall impression will have to do. Besides once their blue bonnets and chequered socks are done no one will take them for anything but Jocks. I shall just say they are subtle, another week I think before they are ready.
Posted by George Anderson at 13:32