Another wargame free week, I am really getting withdrawal symptoms now, again this has mainly been due to map work and real life commitments and the PO getting back to normal. I was hoping to do something this weekend but we are out tomorrow and I think SWMBO has call on my time for Sunday.

The Paras are going ahead at a good pace, the third squad will be varnished and based by Sunday night and I am already half way through my supports, this means to all intents and purposes the guys can drop in on a battlefield near here in a week. As usual I wasn't happy though, I could if needed use Army figures for any missing from the Para OOB, but having wargamers ACDC I just had to order up a couple of Airborne snipers, I got these from Warlord and for some reason one has his scarf wrapped around his head ala Rambo, I am not keen on that but his oppo will arrive first if a sniper is needed. I also realised for Chain of Command an MMG has five crew and a Junior Leader, so a few more add ons were required as the crew is only three figures so I got these from Artizan. Along with the gift of a Para officer from mate Rob this should be the end of the Para force.


Once again I will be at the end of the painting queue, my intention is to add some Dark Age figures to those armies and then get another four battalions for the Seven Years War once the LMF receives an injection. Two British or possibly Hanoverian and two French, the latter will be bog standard as for a French force I have very few battalions in white.


In our Zoom meet this week the person with the most wargame figures was to go last, typical of our wargame roots we had a rule where 3 6-12mm figures would count as one 28mm. Ryan went first with 400, I was last with 7,220, I may have underestimated my ACW troops who came in at 4,000, I also thought Dan and Matt would have beat me as they have large collections in the smaller scales but rules is rules. All the historical gamers had very large numbers of troops and it was a fairly close call.

Although most of us that night had large collections this is not true of the club overall, this gave me pause for thought, are large wargame armies going to die out, to me wargaming allows me to 'lead' armies, not forage parties. To do certain periods properly you need big armies, Napoleonics and Seven Years War for instance and these periods once you get bitten will generally lead to big armies whether you intended that or not. The weekly club meeting does not lend itself well to big games, time being the principle killer and not the space or indeed the figures themselves, this leaves home grown games and I find these harder and harder to organise on a large scale. I once fought the second day at Gettysburg, Longstreet's attack, here at home over two days with eight of us involved, but that was a long time ago. Now I do not have anything against Skirmish gaming and play several examples and thoroughly enjoy them, Bolt Action, Chain of Command, Muskets and Tomahawks, Dead Man's Hand to name a few but when was the last time you saw a big game rule set create as much excitement as Too Fat Lardies new Infamy, Infamy?

While I have my 'whats it all about Alfie' cap on how many paints do you have or use? I just counted and I have about 100, one or two are doubled up but I have to admit there are others which are only opened once in a blue moon and for some reason I have a set of half a dozen or so which to be honest you would be hard put to tell apart. I am using 16 different pots for my new Parachute platoon with only the jacket and trousers using more than a dab.


My grandson was here last week and we played a 'wargame', we used old WH40K plastic figures which had been his fathers, I made the rules up on the fly and he wins every game. This time however it was different before he went home he asked that the next time we play can we play with the real soldiers. As the next visit is at his house he can only train with X-Wing, no matter it bodes well for the future, as we all know you either have wargaming in your blood or you don't. 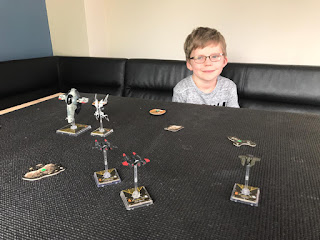 Posted by George Anderson at 15:42