I got my remote game in yesterday, Phil was on time and I had made my choice of troops, I was given two forces and chose the T34/85's over the T34/76's, alongside those I got a Zis-3 howitzer, an SU57, a 120mm mortar and a T-70 light tank, to support the armour I had four squads of infantry with eight men each. My boys were to sweep the Hitlerites from their positions and break the front, in other words I had to run my army off the other end of the table having killed as many of the enemy as possible. Phil had already made it known that the Germans only had to survive for as long as possible to maybe get a draw, defeat was in the air. The defenders of the Reich had one squad of Volksgrenadiers, a Pak 40 and an infantry gun all dug in waiting the Soviet onslaught, reserves were few but available. 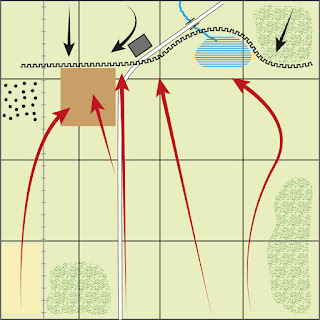 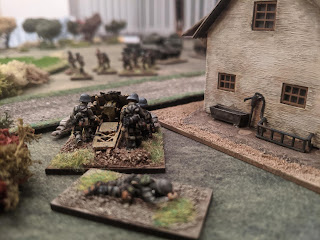 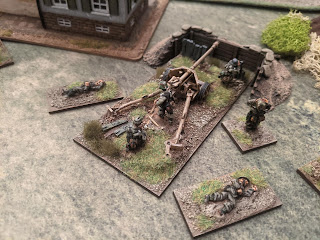 The terrain was very open and I decided to go all 'Zhukov' and simply throw my men at the enemy, I brought all my forces on in the first move and went hell for leather, the Pak opened up and immobilised and set fire to one of my T34's, a bad start for the Russkies, the table edge suddenly seemed a long way away. The fire was put out so the tank became a pillbox and lobbed shells at the Pak, none of which hit, I decided to keep going with the rest, I unlimbered the Zis-3 and it too shelled the anti-tank gun, the mortar had now gotten the range and shells dropped on the unlucky Pak and wiped out the crew. This was not a great loss as after the first shot the gun failed to add anything to the defence.

The Germans now called in their reserves, two more squads, a panzerschreck team and a Jagdpanzer IV, I held my nerve however as the tank destroyer like the Pak failed to hit anything, lady luck was smiling, although my own tanks could not penetrate the panzer's armour. No matter, my infantry were now close enough to assault the survivors of the dug in squad which had been shot up by the T34's and the T-70. Phil now sent a reserve squad to man the defences but it was caught in the open and the overwhelming amount of firepower it attracted was too much and it too was wiped out, the same fate befell the panzerschreck team who missed with their first and only shot.

The only threat now to the Russian steamroller was the Jagdpanzer, the infantry gun and one remaining squad, very soon the gun and the squad were put out of action and the T-70 ran past the panzer and took a shot at its flank at close range, it was enough to knock out the tank destroyer. It was a Russian victory, hurrah!

Although the Russians were expected to win the game the German defence was quite considerable I thought, they mainly failed because Phil's die rolling was dire, both for shooting and morale, one of those games which will always be remembered for its dire consequences, if I had lost the T34's it would have been a hard job to get off the table. I wasn't particularly brilliant but having got close to the German line with little casualties numbers told and the defence was overwhelmed. The photographs are courtesy of Phil and it would have been a joy to play with those beautiful figures, a big thanks to Phil for hosting.

You will probably find an unbiased report on Phil's blog here at some point.