After the hard fought battle at Keetsville on the 21st Price had no choice but to once again withdraw in front of a victorious enemy, Curtis' Union forces, left bloodied but unbowed, reorganised after the shock of coming close to losing the battle and followed warily. Skirmishing erupted between the Confederate rearguard and pursuing Federal cavalry but it did not stop Price arriving at Elkhorn Tavern close to midnight on the 22nd.

At Elkhorn Price was joined by James McIntosh's cavalry brigade, a large fresh volume of troops who had made their way from Fayetteville, Price ordered McIntosh to camp his troops behind what would be his left flank if the Yankee's attacked the next day, no fires were to be lit and the troops were to dismount while their horses were led to the rear, the hope being the wooded nature of the terrain would keep these men hidden from prying eyes. The army settled down with the Guard defending the Telegraph road supported by 1st Brigade to their right, both these formations were in no condition to attack and had lost numbers to desertions and captures, even asking them to defend was a tall order. Price however intended to change his fortunes and put McCulloch's men on his far right with orders to attack through the woods as soon as the action started guessing that Curtis would try one more effort to get a decisive victory. McIntosh was to hold his men until the Federals were committed to attacking the Guard then lead his men forward in a typical Confederate surprise attack. 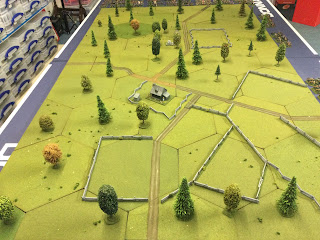 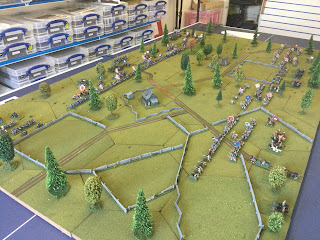 Curtis once again went for an assault on one flank, the Rebel left, hoping to clear the fields and then the enemy on the road, this time however there was not the depth of numbers and the Union troops formed a long battle line. The troops knew that one more push would break the long suffering Confederate troops and while tired themselves, this reasoning buoyed them up for the coming fight.

The skirmishers of both sides opened the battle as did a line of Rebel batteries on their left flank in the open fields past the Tavern, the Union cavalry advanced on foot and took surprisingly little casualties, this was helped by infantry skirmishers pushing forward and bringing the artillerymen under musketry fire. The brigades of the Third division moved on the Guard while the First division lent support, on the far left Fourth division prepared to hold the Union left.

The Union right and centre forged ahead and a fierce musketry duel erupted along the line, the 8th Indiana charged wildly and routed the crews of the Confederate guns taking the pressure off the cavalry, who were now in a position to outflank the Guard. Despite everything the State Guard stood up to the heavy fire directed at them and traded shots with the better armed Federals. With a crises being reached Price played his ace in the pack, a Rebel Yell rang out from the woods to the right of the dismounted troopers as rank upon rank of grey uniforms and battleflags bore down on them. Nonetheless it looked for a moment that the storm would be weathered as the surprised cavalry shifted their positions, but it did not last and the troopers were swept away as was the 8th and 22nd Indiana infantry, all of a sudden there was no Union right flank. Curtis halted his advance and ordered reserve batteries to support Third Division.

About the same time it became apparent that Confederate pressure was also building on the Union left, General Asboth had already pulled his line back but the Rebels kept pace with him and closed to get the most from their smoothbores in desperate close range fire fights. As enemy casualties mounted McCulloch ordered several charges, the Yankee line buckled under the onslaught, desperately the boys in blue tried to hold the Arkansas boys back but each time it looked like the line had been formed it once again shattered. With only his centre holding Curtis decided enough was enough and sought to get as many men away as possible, Price's troops to his front were holding and showed no intention of following so the pace of the withdrawal was picked up before the Confederate pincers cut him off from escape.


Later that evening with McCulloch and a wounded McIntosh urging a pursuit Price gave in to realities and called a halt to operations, the Texans were fresh and the Arkansas troops tired but willing however his Missouri troops had given their last ounce in the defence of the centre and now needed a complete rest after three tumultuous battles, a few hours or even a day would not be enough. Curtis, badly beaten and his own army at the end of their tether decided to retreat back into Missouri and shorten his tenuous supply line, he had swept the state of Rebels and ensured it would not join the Confederacy but the loss at Elkhorn meant a retreat and hopefully a return in the future with reinforcements. 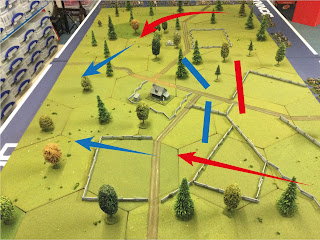 And there we will leave it, how did the commanders fair, James (Price) was not given very much leeway at the beginning and was committed to fight at Flat Creek, at this stage and the way things played out he had a slim chance to inflict a defeat or at the very least hurt the Yanks. Things did not play out that way and his retreat was hounded all the way south, forcing another battle at Keetsville, having met McCulloch's Arkansas troops, this time he narrowly missed inflicting a defeat on Curtis, but was again forced to retreat. Meeting further reinforcements at Elkhorn he once again offered battle and this time the extra troops ensured a much needed victory. Fran (Curtis) always tried to get an edge in the battles and handled the first two well with massive flank attacks, this was almost his undoing at Keetsville where his weak right was smashed but his army held their nerve. His dogged pursuit of Price kept the Rebs on the back foot and the pace and the weather took a toll on them. The army had lost a number of men by the time it took the field at Elkhorn, he could have held back but with supplies dwindling and the temptation of just one more victory destroying Price and Confederate hopes in the Trans-Mississippi, he took the risk. I gave a draw in the end, Price had been kicked out of Missouri and his army too broken to take it back, however Curtis had been soundly defeated and forced to retreat north.

It turned out to be a real joy for me to fight three such excellent battles, especially the last two, I probably was more aggressive in these actions with the troops than I would be had I been fighting with them in face to face actions. The last two games were notable for the amount of charges thrown in by both sides and the amount of success many of them had, I used the officers leading from the front in most of these and was surprised at how many survived such close action with the enemy.

It only remains for me to thank both James and Fran for taking part and allowing me to get these troops out of storage and back where they belong. Sadly they could not take part in the battles but maybe next time.

Posted by George Anderson at 08:47