Rob Broom, author of War and Conquest rules intimated he would be happy to try a game over Zoom and as the first had been successful I decided to try again. I lost two hours of my life trying to circumvent the 40 minute limit on Zoom in order to use two cameras and have a third participant, yes I could have paid £119 but hoping that the lockdown will end at some point this year I did not want to hand over my hard earned sheckles for a few months, anyway, the suits at the LMF would not have agreed.

It was Rob that came up with the idea that we use Zoom for one camera and Facetime for the other, this worked a treat as my headache retreated. Rob as usual was the Seleucid commander and I led the Thunderbolts, my boys, we went for the usual 2,500 points on a 6x4 foot table. The Twelfth mustered three cohorts, one of recruits, along with an Auxiliary cohort supported by skirmishers, a ballista and auxiliary archers (for the inevitable elephants) and some Contarii as my cavalry element. Rob went for two pike blocks, two elephants, Thracians and Companions supported by horse archers and javelins. 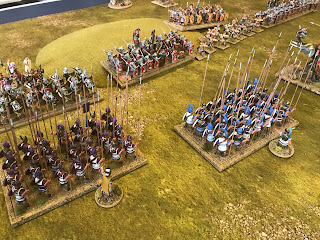 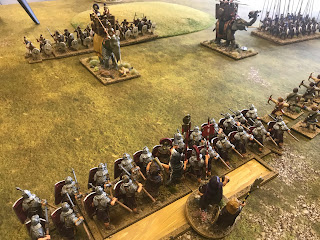 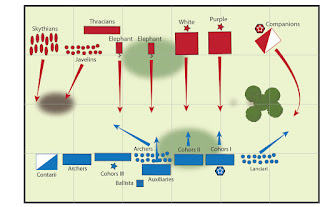 Rob was aggressive from the start as his left and centre advanced at a fast pace, I was a bit worried about the movement of his Companions as all I had to halt them was my Lanciari who could be easily rode over. I was left with no choice but to attack the Purple pike block with Cohors I to get them out of the way of a flank attack, led by the Legate the prima cohort slaughtered the pikemen and soon had them on the run, a profound shock to the Seleucid King. Meanwhile the elephants crashed into the Roman line, Cohors III and Auxiliary I at first held the beasts and although the Auxiliaries came within a whisker of slaying the monster they broke under the pressure. It was now Rob who was forced to attack in order to keep up the momentum and the White pike block charged up the hill and into Cohors II. 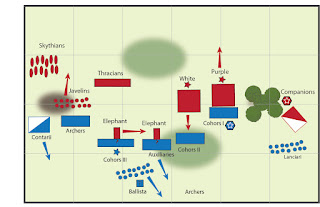 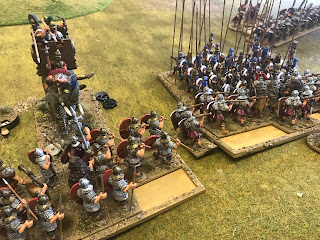 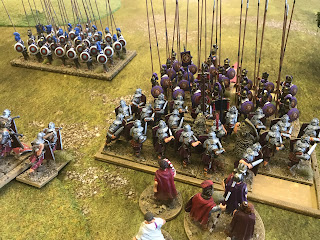 On the Roman left I had failed to chase away the Skythians and the Contarii were losing to many men, I had to try a desperate charge but the men from the Steppes cut down Rome's finest, all was not lost as the Auxiliary archers had caught the javelinmen and routed them. 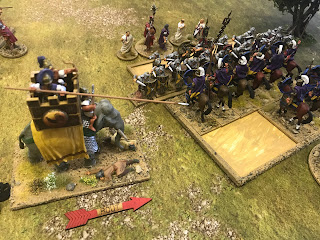 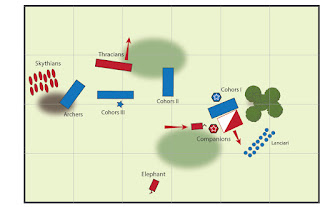 Despite losing Auxiliary I to the elephant which then scattered my skirmishers and ran down the ballista crew, Cohors II had defeated the second pike block and dispersed them. The second elephant had routed and sped across to the Roman right enraged, heading straight for the flank of the Companions who had at last got into action and were in a desperate melee with Cohors I. The horsemen fled just before the elephant hit them, over on the left Cohors III after chasing away their elephant, smashed the Thracians who in turn ran. It was all over, a fine showing by the Thunderbolts and a sad defeat for the Seleucids.

Now the game, Rob has a reputation as a bad die roller and he just about lived up to it in this game, he hardly ever won initiative during the turns and some of his combat and saving rolls were simply dire, he was not alone however as my missile troops all proved to be useless, even my favourite Lanciari, also my heavily armoured Contarii simply refused to save any hits and died to a man for it. On the other hand my legionaries were simply unbeatable, three times Cohors I hit with 95%  of their dice, Rob made some decent saving rolls during these combats but the writing was on the wall. I missed charging the Skythians and should have hounded them from the beginning but I doubt if this would have helped the Contarii much. I learned a few things about using elephants and realised I had them wrong before, so playing the author does help. A great afternoon.

My early war German infantry are now all but done, a few to varnish and base and that's it, still looking for a sniper figure and a decent Forward Observer but they can wait. I have not got my Blitzkrieg order yet and dropped them a line, hoping to get them tomorrow, I also have no idea when in March the new Soviet squads will be turning up at my door. I did get a Warlord Panzer 38(t) on Amazon as they are out of stock at Warlord, it turned up within 24 hrs and I had it done and dusted before the sun went down. A beautiful little kit, I used my Panzer Grey for the first time and thought it was going to dry shiny as it looked to be a high gloss, no fear though and after a few hours it had turned matt, with a bit of dry brushing and weathering it turned out lovely. I also finished my 76mm infantry gun for the Soviets, I had to look up pictures of the real thing in order to build it, OK, there was not a huge amount of pieces but why not pop in a piece of paper with instructions, how lazy and annoying is that. 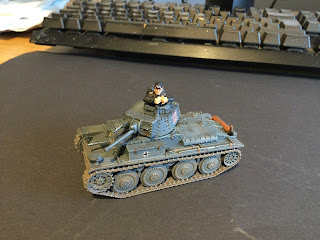 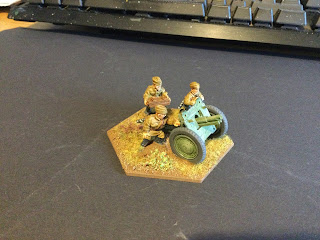 I joined and watched an excellent piece of military history on the Battle of Sedgemoor 1685 during the week by the author of 'Fighting for Liberty' Steve Carter and General Jack Deverell, I enjoyed it so much I am going to order Steve's book. I also watched the Tank Museum piece on modelling, a very pleasant little video.

So what for the future apart from some early war vehicles and the Soviets, well nothing for now, I hope to try another few remote games and wonder how a WWII game would work. Mate Rob Martin is starting a WWII naval campaign in which I shall play the part of the CinC Royal Navy (natch) trying to catch Scharnhorst and I think Gneisenau as they attempt to interfere with British convoys. Another couple of SYW battalions will be on the cards but not until well into the year.

Posted by George Anderson at 15:44