Had my second remote game hosted by Phil Robinson last night, back to WWII and this time we used the Battlegroup rules, these are generally for large actions but can be cut back to platoon level, I have experience of these rules from games at the club and they are quite popular among some of the members. Phil sent me all I needed and I was intrigued enough to look at the rules, quite expensive but they cover a lot of the big events i.e. Kursk, Arnhem, Normandy etc. The production value is very high, nice books with a lot of information in them. But I don't need more WWII.

I was the commander of a Volksgrenadier platoon with a Panzer IV in support along with a couple of mortars, Phil was the British his platoon also had mortars and a Cromwell. I was attacking and again decided to be aggressive in the opening moves, my first wave included the tank and I sent one rifle team out on the left towards a ruined building while the rest of my lads made for the first line of hedges. 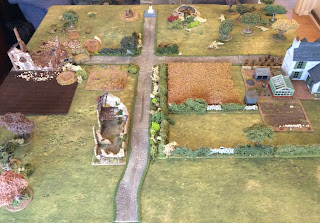 This went fairly well and my left flank rifle team got to the house and dispatched the unlucky sniper hiding in the ruins, I wanted to throw my right forward but I had forgot my LMG teams so decided to wait a bit. After exchanging fire for a couple of turns with not much happening we both got our reserves but sadly I did not get enough orders to coordinate an advance so it was fairly piecemeal to the second line of hedges. I had obviously disturbed a hornets nest as within another couple of turns I had a rifle team wiped out and had to take some chits to unpin half my army. You have a morale rating and at times you have to take a chit, once these number the same as your morale you lose the game, instead of numbers some chits have events to help or hinder one player or the other. My rating was 16 and at the halfway point in the battle I had collected 10, it seemed the writing was on the wall. 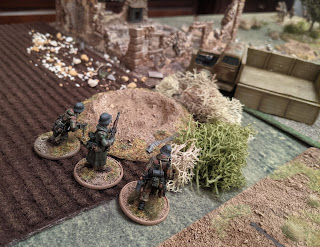 Wait, a high pitched scream and from out of the blue the iconic shape of a Stuka dive bomber swept the British line cannons blazing, the annoying British MMG disappeared, a cheer went up from the German lines. As I reorganized my badly battered platoon the Stuka continued, despite some desperate AA fire from the British squads, to cause havoc, I also picked on the small teams as the aircraft easily wiped these out if it hit and this caused Phil to reach for chits. The British were having to concentrate on the Luftwaffe instead of finishing off my infantry they also ran their Cromwell forward to try and break the stalemate, the shot bounced off the Panzer IV and the return fire brewed up the British tank, more chits. 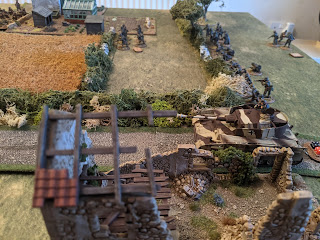 Although Phil still had three almost untouched infantry squads left all his support teams, armour and HQ had been killed and at last he took one chit too many and had to withdraw, a relieved German commander watched them go. 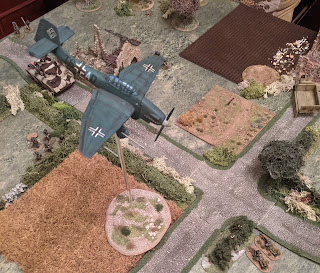 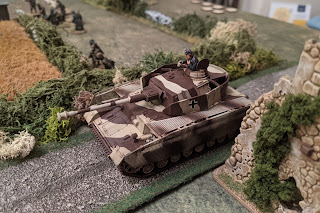 The pendulum had swung for both sides during the game, I made a good opening but was then halted and suffered quite badly, partly my own fault for having left off the LMG teams and also on occasion having dire order throws which allowed me to barely make a brew never mind hurt the British. Phil had better luck in this game than the last but suffered from not being able to bring in his mortars and when they did it was 'danger close' and he cancelled the order from fear of hitting his own troops. I didn't have much luck either bringing in artillery, and me being an old Naval Gunfire Support hand. Orders or lack of them are very important to this game as is the pinning mechanism, the rest is fairly standard and easily picked up. So once again a great way to spend a few hours with a chat afterwards and thanks to Phil for taking the time and hosting. Another report here.

Phase III is finished, it has taken me a week this time, having said that the Pak 40 crew have not been painted although I did start them last night and I have only just taken delivery of the lovely little BT-7. Once again a simple Panzer grey sprayed over a black undercoat, I did not give any of the grey vehicles a wash as the paint was pretty dark to start with so merely drybrushed them with Blue-Grey, I think it worked. While looking on the interweb to find out about markings it was noticeable that most of these early vehicles did not carry a lot of stowage, so despite getting quite a few pieces of canvas in the PzIV kit I decided to leave the tanks alone. The early halftracks also did not carry a lot of stowage nor did they seem to have that extra tire on the front which Rubicon gives you, but I did notice quite a few fuel cans here and there on them, so decided to go easy on them too, but the end result still has a few items hanging on the sides. 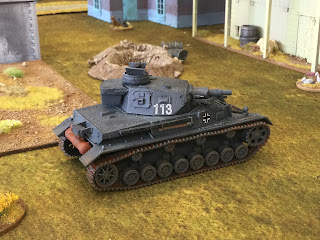 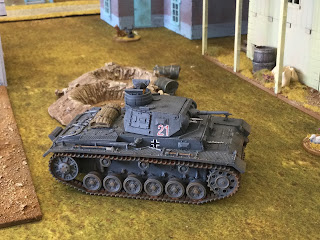 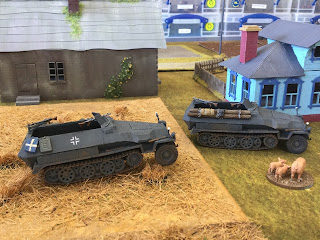 I still had a small amount of Royalties left and with £7 of 'Rubi Rewards' in the bank I ordered Phase IV, these are not needed but they will 'complete' the collection; one Opel Blitz, One Opel Maultier and one Gaz truck. Is that me done, well I am not sure, Phase V could be a 250 halftrack for the HQ or as a Recce vehicle and an SMG squad for the Soviets, watch this space.
Posted by George Anderson at 14:22