I was stuck earlier in the week and had hoped to get a Bolt Action game in with my son but he was busy, so at the last minute I gave Rob Broom a shout and asked if he was free for some War and Conquest, to my delight Rob said he would. I decided to do Dark Ages this time as we usually play Seleucids vs Romans, Rob likes the former and I like the latter, so it would be nice to do something different.

Rob asked me to put together two typical lists for both armies, when he does play Dark Ages he has played Romano-British, I usually play Saxons, so we swapped for the upcoming game. The game was 2,500 points and each side had six battle formations, four infantry/mercenaries and one cavalry supported by a couple of skirmish units, there were three commanders and four SIPs (Strategic Initiative Points) as well. Although the armies look the same there are a couple of subtle differences, the British get the choice of large shields which with the lack of armour in these armies is a boon, the Saxons however get Warband which helps in melee. To offset the shields I gave the Saxons two large warbands, one being the Frankish mercenaries with a heavy throwing weapon, both also had hearthguard troops led by their respective leaders.

Deployment was fairly typical but the Saxons had held back their elite troops as a reserve, so as the Dux looked over the field of battle it seemed the Saxon main line was weaker than the British and the Ceorls and Duguth 1 if they could be caught would be outclassed by the British. The Franks looked like a problem as they would probably beat the Welsh in a fair fight so I hoped my cavalry and javelins would quickly overcome the enemy skirmishers and then wheel in to help the Taff's. My trap was set. 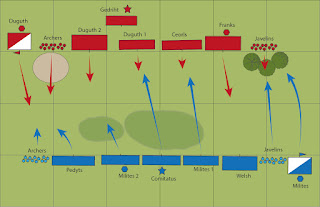 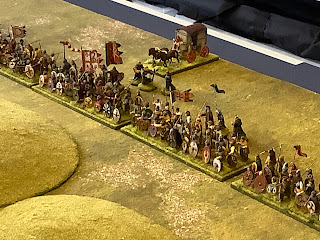 I had to turn the Pedyts towards the enemy cavalry as I could not let them get behind me, they in turn charged and dispersed my archers, however they were so keen to pursue they put themselves in a position where the Pedyts caught them in the flank and routed them. Sadly for me both the Pedyts and my archers ended up off the table, however both rallied and would later come back. On my right I could not budge the annoying Saxon javelins, I was losing time as the Franks continued towards the flank of my line, I had held the Welsh back but now had to bring them forward to prevent the flanking move, the Franks turned towards them. 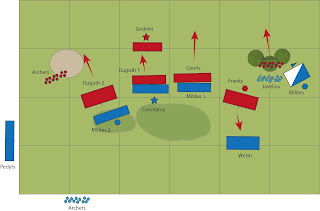 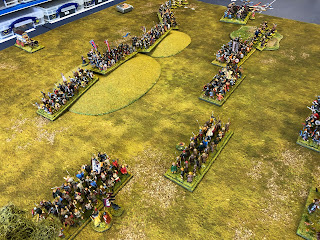 My Comitatus and Milites 1 now smashed into the Saxon line, although the enemy put up a decent fight they soon turned and ran, Duguth 1 to rally behind the king and the Ceorls to run all the way home. Duguth 2 fled in concert with their friends and things looked good for the British. The Saxon king now brought his companions into the fight and threw his men at the Dux and his Comitatus, this stiffened Saxon resolve and the Duguth units rallied, victory was going to be harder than I thought. The Saxon Gedriht got the better of the fight for a long time until their luck ran out and in a surprising turn of events the Comitatus began to push them back, both sides had suffered horrendous losses and both the Dux and his standard bearer were bleeding from wounds. Duguth 2 had now come back into the fight but their opponents were winning that fight as well due to the fact the Duguth were also struggling through the marsh. Behind the Gedriht Duguth 1 was in combat with Milites 1 and again losing the fight, men in the rear ranks began to look fearfully around them. 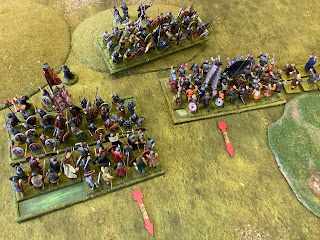 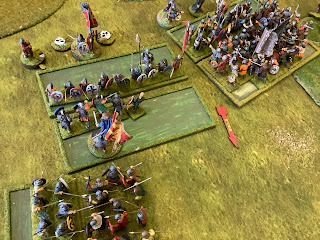 The Saxon household at last broke and the victorious survivors of the Comitatus smashed into the flank of Duguth 1 in their pursuit, on the left the Pedyts were also now in a position to threaten Duguth 2, it was all over, the Saxon king was hauled off the battlefield by his remaining retainers and a wounded yet smiling Dux watched him go. 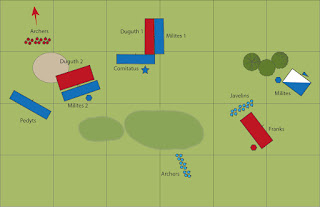 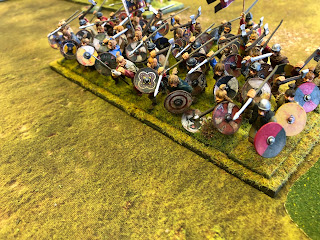 Another great game and again a bloody yet typical Dark Age bloodbath, no fancy manouvering with these armies, no sneaky tactics or strange troop types, it all comes down to combat and holding your nerve, victory has to be grabbed by the throat. Apart from my missile fire being completely useless until the last round I cannot really complain, OK the Comitatus gave me a fright for a time as the Gedriht seemed unbeatable but their morale held and they came back and surprised both Rob and I. Rob's luck again was probably just below average however his Ceorls stood a lot longer than they should and they also had me worried at one point, they might be reluctant to turn up at a battle but they, and the Pedyts, can be dangerous if taken for granted.

I still have a few troops on the paint tray and my 250/1 command vehicle and SU-100 kit are hiding from the missus at the back of the study, I have a StuG D on the way so will get the troops done first and then get the last of my vehicles sorted. I am glad I jumped into this remote gaming and it is also great to have a chat while playing and then the Recrimination Phase at the end. I need to organise another one.

While out for my walk the other night I ran into Duncan just back from a shoot somewhere down south, he took his halftrack and is unhappy that they painted it a sandy pink which the film crew thought was a good colour for the Western Desert, so why pay a military adviser then. During the chat he mentioned he was paid to take an APC to Cannes for the release of Expendables 3. Intrigued I watched the film last night, dire, absolutely dire, 9 guys and one gal kill almost the whole army of a small fictional Eastern European country without even a scratch, it was muck. I did find the photo below however, Duncan is in the driving seat. 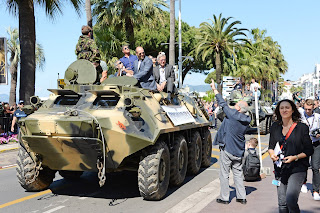 Posted by George Anderson at 09:41