When I first got back into Chain of Command I watched a game on YouTube where Richard Clark introduced the game to one of the guys from Beasts of War, the scenario looked really interesting and it was intimated it was a pig farm. Now that I have my Barbarossa forces 99% ready I watched again and set up my own pig farm for a second remote game with mate Billy, we played Bolt Action the first time so it was CoC this time with the added bonus he has played CoC before.

I sorted the troops out as per the Chain of Command lists for Barbarossa and rolled for support, the Germans got nine so I rounded up and gave the Russians 5, I have two games organised for this week, Billy yesterday and Phil tomorrow. In this game I was the Russian defenders as the Hitlerites poured over the border, I knew they had enough points to bring at least a couple of tanks so I needed some kind of anti-tank capability. In the end I went for the BA10 armoured car whose main gun was just as good as on the T-26 or the 45mm anti-tank gun and as a bonus it had two machine guns, I also gave one of my squads a satchel charge just in case the panzers got too close. Billy took a PzIIIG and a PzIVD. 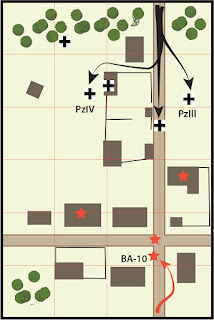 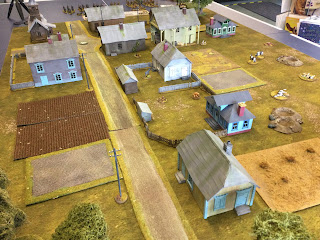 I played it cool in the opening rounds and kept my defenders hidden off table, the Jerries advanced a squad and set up in the Blue dacha on the outskirts of the village, the lines of fire were slightly obscured but enough to get an LMG and a couple of rifles to cover the far end of the village. Another squad lined the wood just outside the village on the right flank, it was time for me to get some troops on the table, I set up in a large house near the crossroads and battle commenced. My squad in the house obviously did not want to be there as their fire went everywhere except at the Germans, the enemy return fire started to whittle away at the defenders and shock climbed, being large thirteen man squads the latter wasn't so bad but the number of killed was a worry and I pulled them back from the windows. I brought on a second squad, NKVD border guards and they took up a position in the large barn and again after a brief fire fight with the enemy in the far woods retired to the rear. 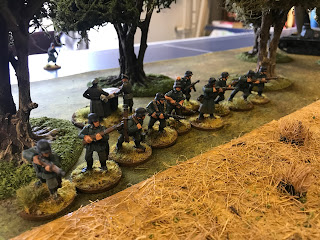 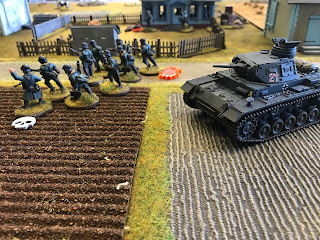 Getting a double phase and no threatening enemy the Germans set their third squad up the road at a run supported by the arrival of the Panzer III, this began shelling the house at the crossroads and more of my men fell. I had to do something so on came the BA10, out of sight of the German tank its machine guns began to take a toll of the infantry on the road, I also moved my squad back to the windows and Jerry casualties at last began to climb, albeit slowly, too slow for me as my dice continued to be dire. 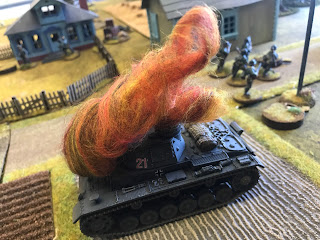 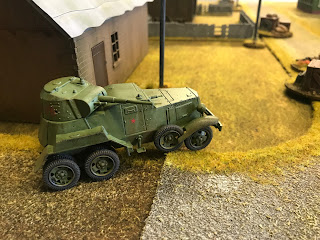 With Billy pulling back his men on the road and bringing more armour on, the PzIV, I threw caution to the wind with a double phase and moved the BA10 to bring its gun to bear on the side of the advancing PzIII, the shot did not knock it out but it did destroy the gunsight. Billy decided to retaliate but I interrupted and this time the tank went up in flames, my elation did not last long as in the next phase he interrupted me and the BA10 blew up. Faced with the threat of an almost invincible Panzer IV roaming the village I brought on my third squad and fired down the road at the survivors of the rash squad, these guys had already lost their leader and one team so the lone survivor now broke and German morale collapsed. 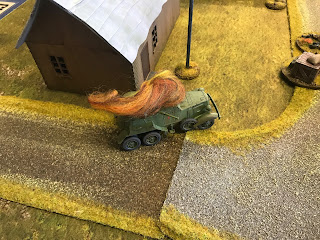 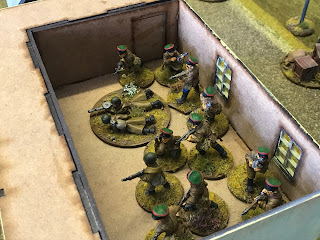 A good little game and perfect for a remote clash, we had both started with 9 on our morale tables (I always add one to the roll) and we kept pace with each other as leaders were wounded or killed. Without managing to kill the last squad I really do not know how I would have dealt with the remaining tank, probably have had to play hide and seek and get the satchel charge close enough or go after the remaining infantry. Anyway, I have Phil to play tomorrow and I am the bad guys this time.

I am almost finished with what has morphed into my large Eastern Front project, which now stretches from Barbarossa, through Case Blue, Kursk, Bagration and then to the streets of Berlin, not bad considering I was never going to do the Ostfront. The latest additions were a BT-7 tank, a really nice resin kit from Warlord, I hear bad things about their resin but cannot complain about any of the stuff I have had, for the Germans I finished a Pak 38 5cm anti tank gun. Although transport does not figure much in WWII skirmish games I like to have it so I added an Opel Blitz, Maultier and Gaz AA to the pot. 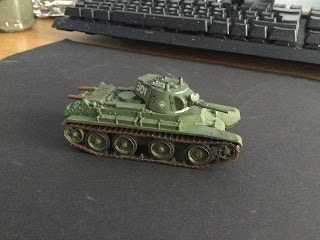 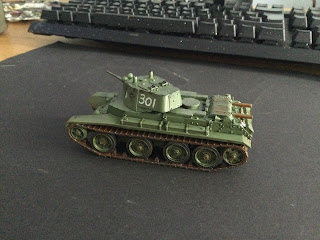 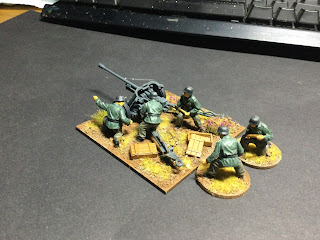 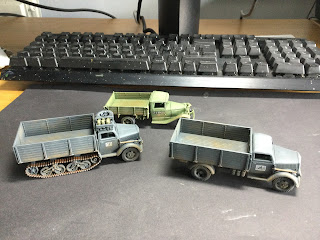 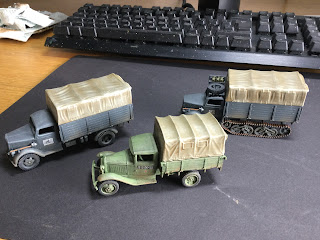 Am I done, well almost, I do not have a Soviet SMG squad and found that if I add eight riflemen to my Volksgrenadiers I can field either a Rifle or Assault platoon, so they are on the way as is a Russian command group which contains a medic and a radio operator, of course the Russians had medics! I still have a small wishlist of a 250/1 as a command vehicle and a StuG D for early war, so, almost.

After a very busy time with maps I have had a quiet week but now I am back in the Western Desert with a book on the Italian army in WWII and a second volume on the Anglo-Spanish war 1655-1660.

Posted by George Anderson at 11:18