Club night again and another fight for a parking space since a kids sports thing opened up opposite the school, damn. Anyway, it was Bolt Action as Duncan wanted to get his new Germans on the table, so a quick intro game at 800 points. I took the British and had three squads supported by a MMG, Bren carrier, Humber armoured car and an M10, I wanted to move the MMG in the Bren carrier but forgot to. Duncan had quite a few five man squads which I intimated were not a good idea, a halftrack, panzerschreck and a StuGIII.

Pretty much expecting to shoot Duncan's little squads up with one volley I deployed two infantry squads on my left, the MMG and Humber in the centre then the M10 and my last squad and the carrier on the right. As we deployed I found I had to put all my stuff down first as British die after die came out, this continued for the first few rounds which put me on the back foot and stopped me getting the drop on the small squads. To my chagrin Duncan put a lot of hurt on my boys, one squad was dropped from nine men to two almost immediately, it only just stayed on the table but dug in and useless. My own replies when they came were pathetic and only dinted a few German helmets.

The StuG and M10 settled down to a duel in which neither could knock out the other, my carrier and armoured car were worse than useless when returning fire, no, the Humber got one good shot in all game then nada. I was being forced to hit the ground as I could not dent the small squads due to my losses, even Duncan professed I was 'unlucky'. 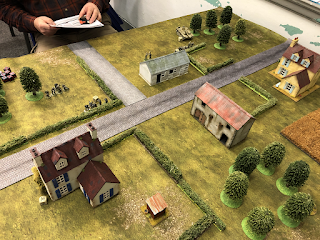 As the clock ticked down I was one point up but during the last turn I just could not hold things together with my survivors, the M10 went up in smoke, I lost the MMG and a squad, or maybe two, I was in shock as Duncan leapt to 4-1. So much for experience, the fact that the German dice came out first nearly every turn along with my pathetic shooting tilted the game in Duncan's favour, he also played well with his new troops and did not make any mistakes I could have jumped on, although on balance I would have fell over had I done so. I am bringing the Thunderbolts to the table next week, so the pressure is on not to fail again, not with my boys.

As for the cat, my 'hero' Rigsby from 'Rising Damp' always kicked his cat Vienna when things did not go his way, and I don't have a cat. 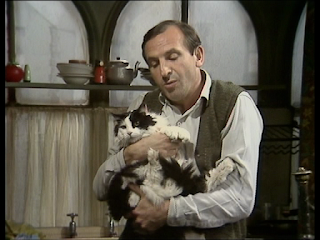 I suppose I should have done this in my 2021 review, but as I am sitting with nothing to do and thankfully hardly any customers I decided to see just how many wargames I played in the last year. The grand total was 53, a few of which were remote games, at least a dozen perhaps at the beginning of the year. The overall winner was WWII with 19, followed quite surprisingly by the ACW with 11, War and Conquest 8, Seven Years War 6, Cowboys 3, French and Indian Wars along with Sci-Fi 4 and bringing up the rear with one each of Wings of War and Napoleonic Naval. There would usually be a few more different periods in the one to two range as club member Rob organises all sorts but Covid had a sobering effect early in the year. This year will probably be a re-run of the same as I really want to try and capture a willing player for some WWII mini campaigns, my pushing the ACW was a success last year as the boys have hardly been seen in the past twenty years since scaling the Wall.

Phase 1 of my plan for the year is going well, the Crusader SYW figures look really good once painted and I have used Contrast paints on the main red and white uniforms, so a wee bit of speed painting there. Once you get past that and the facing though you have all sorts of bits and pieces, buttons, musket, metal fittings, lace, scabbards, hats, all of which seem to take a lot of time. I was tempted to call a halt after the first battalions, but then ordered up the second lot and now they are here and on the paint tray, in order to complete the third lot, which I have not ordered yet, I have sent away for their flags and finials so I have to get them now. 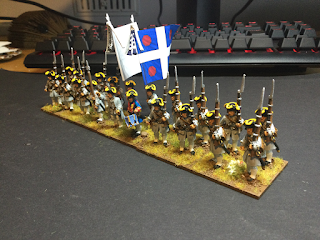 I am still only scratching the surface with my fixation on the Italian Wars, I am reading up on battles and looking at possible figure ranges, at the moment it seems to be Steel Fist and Foundry, I know both are not cheap ranges but they do look good. I am also keen to use speed paints on this new project, the basic Army Painter range is out in February and as I have quite a few GW Contrast paints this should be more than enough.

Posted by George Anderson at 10:57