Something wrong with the boys today

Another Sunday of fun yesterday on a bleak January day. I had set up a Johnny Reb II game with three friends based, again loosely, on a battle from one of my scenario books. Loosely as I wanted it to be slightly more even than in the book as Rob had only had a few games and Ed was completely new to the game and period but what he lacks in knowledge he more than makes up with enthusiasm.

The battle was Chester Station in Virginia in 1864, in reality it was one Confederate brigade against two Federal as the second Reb brigade turned up late, too late to take part. This time I took the opportunity to put some of my larger regiments on the table,Yankee strengths were large at this action, and allowed the second Reb brigade to arrive on turn one, I also added some regiments to the OOB for both sides so that we got a decent fight out of the game, so 'loosely' based. For this game the Rebs had to capture the crossroads on Winfrey Ridge.

Rob took Hanson's Brigade on the right opposite the ridge and Harrow (Fran) defending while I took Gordon's on the left against Webb (Ed), names changed to suit the figures if you look it up. My plan was to sweep Webb away and turn and put pressure on Harrow, I wasn't sure what Rob's plan was apart from taking the ridge, we missed an opportunity to put a plan together while giving the Union players time to chatter, duh.

On arrival I duly advanced in force against Ed, he had some skirmishers out front at a farm and I planned to take them under fire with my skirmishers then advance two regiments and blow them away with concentrated firepower, my other troops would advance towards the edge of a wood to await my victorious left and then together assault the Yankees to win the woods. I pulled off the movement on the skirmishers only to have both my main assault troops fail miserably to cause any casualties on the enemy, as the smoke cleared to my horror the skirmishers were still there and my opening volley wasted. I couldn't just charge them as there were Union reserves behind the far fence which would have stopped any chargers who pursued the, hopefully, fleeing skirmishers dead. I fatally hesitated. Ed meanwhile advanced more of his men into the woods and took up defensive positions.


As I looked to the right Rob had moved into a small wood to his front held by Union skirmishers and began a desperate fight for the position, he was also moving the 6th Texas up against the Federal flank but it was being badly hit by Federal artillery. Rob won the wood and our artillery had forced Fran to pull his line back from the edge of the ridge, it looked like a stalemate was building up, Rob would take heavy casualties cresting the ridge while Fran would take punishment holding a forward position. The next time I looked over things seemed to be getting worse for the Union, some of their gun crews had been shot down while the dangerous Napoleon battery had had to retire to re-ammunition.


Back on my flank I had to push a skirmish unit out to my right to stop Ed's battery taking potshots at my Savannah Guard, I really could have used it to move into the woods instead. Time was running out for us so I pushed two regiments towards the woods again hoping the weight of musketry would avail me something, but again my boys failed and I lost the firefight. Looking to the right I noticed Fran had rallied and was now pressing forward down the slope putting pressure on Rob, I decided to throw caution to the wind and charged the annoying skirmishers to my front, sure enough the 4th Va. managed it but got shot to bits by the 54th Mass and had to disengage, I followed this up however with another charge by the 1st Tennessee and the 54th instead of dealing out a lot of hurt fled for the rear in rout, maybe things were going to be alright after all.

Fran had now seen an opening and a chance to wreck the Confederate centre which consisted only of skirmish lines, a successful charge would leave a huge hole in the line. Recognising this, albeit late, every gun and musket was turned on the 5th Minn. and the charge was stopped dead, another by Ed however did knock one of my regiments back but he disengaged to the shelter of the woods just in time. I now threw in my last chance at breaking the Yanks in the wood, the plucky Savannah Guard went in again and despite losing over 50% of its strength came so close to winning I looked to the heavens and asked "why?" My second charge with the 17th Tenn. failed miserably and was thrown back, and this regiment without so much as a bullet hole in its flag. I did manage eventually to get the 1st Tenn. in the wood and capture the 20th NY but it was too little too late, I had run out of steam, in fact the whole Confederate force had lost its offensive power.

What went wrong, well although overall the dice Gods had been equally favourable to both sides success evaded me on several occasions by the narrowest of margins, my own men seemed to have given up in the latter part of the battle. I was also hampered by the terrain and having farms split my brigade but having said that I think I put too much effort on the left of my brigade rather than making a larger effort on my right against the woods. Ed fought well in his first game and the 52nd NY earned his respect for being immovable in those damn trees, this regiment was my undoing. The Savannah Guard on my side despite failing deserve an honourable mention. I cannot speak for the battle on the other side as I was heavily engaged running my own attack, but it looked just as desperate as my own and could have gone either way, a brave assault by Rob and an equally efficient defense by Fran.

I have finished the first of the last SYW battalions, the 25th Foot, the Regiment Nice is nearly there and I have two more on order. 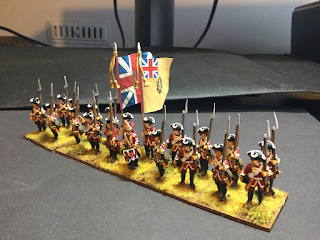 We had our annual Club dinner on Friday night at a Curry House in Lancaster, we almost had a full house and a great time was had by all. The restaurant did not have any 0% alcohol so I was forced to consume real drink, my intention was to make one pint last all night, however I got caught up in the excitement and managed three with another later as we moved on to a pub down the road. Even in the old days four pints would have been my limit, I have now consumed my entire allowance for 2022! 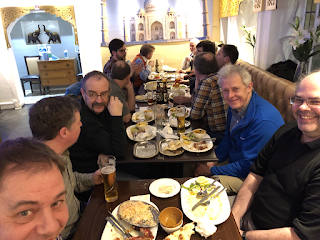 Posted by George Anderson at 11:09