After my fiasco at FIASCO I was looking forward to the York show, I had my doubts about how many traders would turn up as Helion & Co. have been trying to get in for years and managed it this year, which suggested someone was not turning up and there was space to fill, also the organisers had actually phoned mate Rob to see if he was putting on his usual participation game (he wasn't).

Julian along with Stuart picked me up early and off we went, we got there around 1030hrs and were surprised at the length of the queue, however we got in fairly quickly and the first thing I noticed was the lack of any wargames on the ground floor. Now I know Vapnartak is mainly a trader show and I have no problem with that but as a wargamer I do like to see wargames. It was also apparent that some traders were not present as the space was fairly open, there was a good crowd in attendance but again not as busy as previous years but not by much. What I did see was that by 1330 hrs when we left the crowd was thinning out quite noticeably.

I discovered there were some games but these had been shifted to the fourth floor, there were only about half the usual participation games, a couple of large exhibition types and no tournaments. The guys on the Lance and Longbow Italian Wars game were very helpful and engaged me for a good 10-15 minutes, the guys playing the imposing big desert type back of beyond game were too engrossed to offer any commentary while I was there and I saw at least one intrigued youngster aimlessly wandering around the table. Sorry but I didn't take many photos. 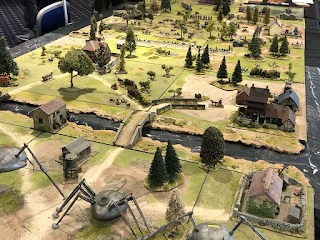 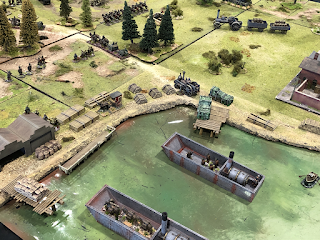 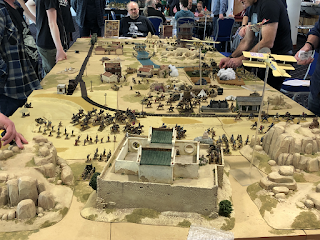 I did manage to get a word with Andy and Andrew on the Helion stand and caught up with Andrew on some projects. It is also nice to actually see the finished products which contain my maps of which there were quite a lot. Wandering around I bumped into Ken Reilly of Yarkshire Gaming fame and berated him for turning my gaze towards the Italian Wars and the future bankruptcy which attends such a move, 48 figures for one pike block! While on the subject I got to look at Foundry's range for the period and was very impressed, so much so that despite the rise in prices I suspect I shall get the core of  my army from them. Julian has decided to paint some figures for the period and although mainly a fantasy wargamer he does have some historicals and is an exceptional painter and wants to try his skills on the colourful units. He bought at least three boxes of Perry figures for the period.

What did I buy, tufts, bases, some dice as if I don't have enough, some rubble for my city ruins and I picked up some Seven Year War cavalry which I had ordered online from Gripping Beast. I was prepared to be tempted should I see anything interesting and although I did see some nice pieces my wallet stayed firmly in my pocket.

Covid is still having an effect about maybe 25% continue to wear masks and I am sure others simply decided not to turn up. I don't know what happened to actual games, perhaps it was a deliberate policy of the organisers to limit the number or people just decided to give it another year. I confess to being slightly apprehensive myself but I feel fine and am all the better for getting to the show.

Club night yesterday and a visit to the Eastern Front with Chain of Command, the Hitlerites attacking once again. I had a typical army platoon and decided against a tank for support and instead took an infantry gun and a 250 halftrack with a small reconnaissance team onboard, I also had some defences for the gun to keep the crew safe. As each of my squads had a panzerfaust and the platoon gets a panzerschreck I decided that was enough to tackle any small Soviet tanks which turned up, if they did. Simon defending the Motherland took a T-70 and an MMG team.

I started with one squad on each flank, Simon was being cautious and put one squad in a small wood on his left opposite my boys and a firefight ensued which would last all game, he also put his MMG in a ruined building in the centre of the small village and it too began to pick on my left flank squad. This meant I had to deploy my infantry gun and start lobbing shells at them. The Russians now decided to make more of an effort and the T-70 arrived as did two more squads, one of which was caught in the open, they lost their leader which put an end to their advance. I now brought on my halftrack with the intention of moving it forward and deploying the recon team so that two machine guns could join in the hurt on the Soviets in the wood, but I never did manage to dismount the team and relied only on the 250's machine gun. 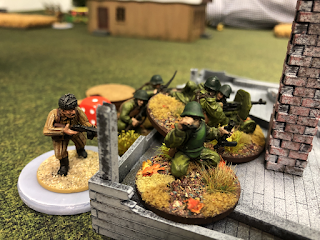 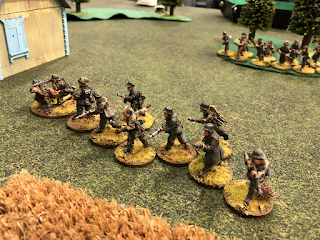 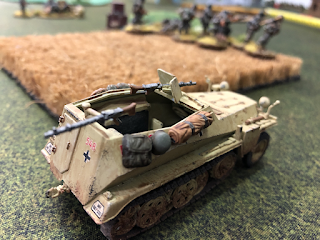 I now managed to get a double phase and pushed a squad up to take on the MMG and they wiped it out while a second turned up to support them, frustrated, the T-70 was now advanced to try and take out my infantry gun. An evil smile lit my face and just when I needed it I managed to bring on my panzerschreck, the team quickly identified the little tank and up it went in a thousand pieces, Soviet morale now failed and the Jerries advanced to take their objectives. A good little game and we got it finished in record time for Chain of Command.

I have started the cavalry and just this afternoon took delivery of three buildings from The Grand Manner, again for the SYW, I have also completed the penultimate British battalion, His Britannic Majesty's 11th Foot alongside some civilians and an artillery limber. All I have to wait for now is the last of the infantry battalions from Crusader and that is it, or rather that will be me on to the Italian Wars, a long project and a lot of troops, my retirement project. 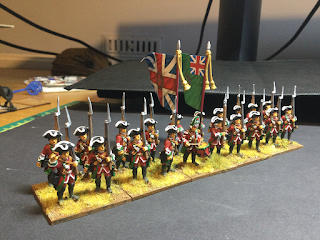 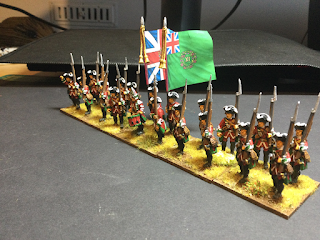 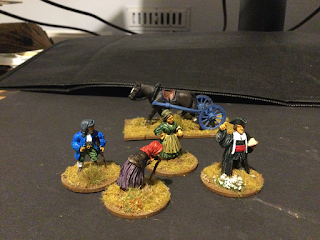 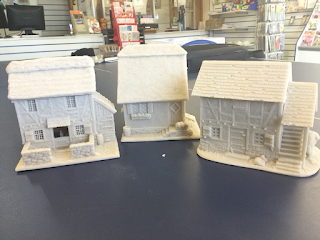 I have started reading "Like a Brazen Wall" on the battle of Minden and the author mentions a couple of maps of the battle drawn shortly after, the best by a William Roy of the British army. I was intrigued because as a boy growing up in Carluke I used to pass a signpost labeled 'The Birthplace of General Roy'. It transpires that Roy is the founding father of the Ordnance Survey and the first man to completely map Scotland, the main reason being so that British soldiers could march quickly through the country should the Jacobites ever cause any more harm after the '45. Now here I am centuries later, also from Carluke mapping the battle of Minden, I very much doubt as well as General Roy.

I once again have Little Wars' St. Nazaire game on the table and will be playing on Sunday, looking forward to it.

Posted by George Anderson at 13:30