The Sea Wolf lifts the curse

I got the chance to play with Rob last night, the first in a while as I have been a wargaming butterfly playing quite a few different periods and people, the club is booming at the moment and we are now taking up two classrooms instead of one. Anyway, Rob had organised a game of Black Seas which I have not played for two years, that was a surprise to me when I looked it up, bloody Covid.

I took the British, James the French and Rob the Spanish. My small squadron of the frigates Achilles (flagship), Ajax and HM Bark Sheraton were sailing to intercept a wrecked vessel loaded with supplies of gunpowder while a French squadron of the same make up were bent on destroying the beached vessel, two small Spanish privateers had also heard of the booty and wanted a share. The French and Spanish made straight for the wreck amongst the shoals while I sent Ajax ahead and turned Achilles and Sheraton to port with the hope of raking the sterns of the French as they manoeuvred to come upon the wreck. The French flagship managed to reach the wreck at the same time as the Spanish and both fired on the beached vessel starting a raging fire, Ajax could do nothing to help but in the true traditions of the Senior Service set battle ensigns and charged into the fray. A deadly broadside caused one privateer to strike her colours, the French flagship having completed her task now turned for the open sea, Ajax now took aim at the second privateer and sent her to the bottom, it would now take time to tack and pursue the enemy. 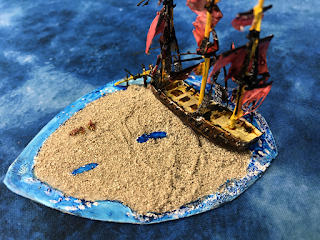 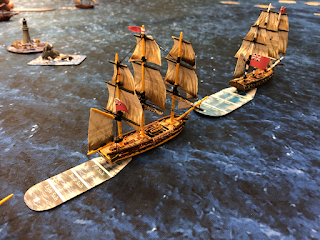 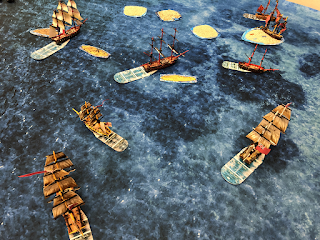 Meanwhile the other two French ships seeing the flaming wreck now turned to confront the Sea Wolf and Sheraton in an effort to escape, broadsides crashed out from all vessels but the British gunnery won the day and soon both French ships had struck. Ajax gamely tried to catch the French flagship and managed a few long range shots before her superior speed took her out of harms way. Although the French had completed their objective the British had claimed three prizes and one vessel sunk, the supplies aboard these would more than make up for the loss of powder on the blazing wreck. The captain of the Ajax and the British squadron are building up a terrifying reputation amongst their enemies. There is a rumour of an Earldom in the passages of Whitehall. The engagement had not lasted long so Rob and I took a frigate and bark each for another tussle, once again the Royal Navy won the day as the French bark escaped and the frigate struck.

There was a moment there as Ajax took on three of the enemy and the Achilles seemed to be facing an empty sea where I thought once again this year a defeat was staring me in the face, not that I believe in superstition. But somehow the pendulum swung in my direction and the curse was lifted, the rest of the year now holds no fear win or lose.

There was a big Napoleonic game organised in Grange last Sunday but I could not attend being away in sunny Darlington for a delayed birthday dinner with my son and his family. I did however manage to get a game of Blood Bowl in, my third since spending the GDP of a small country on it.

The Coach of the local team was taking no prisoners having lost the last two games to the Lanark Lemmings and brought his first team, the Swamp Boys, to the pitch, the home fans were of course delighted. The Lemmings received the ball in the first half and instead of taking advantage while half the Lizards were on the ground the Lemmings played a cautious game and then lost the ball. The home crowd went wild as their team broke through and made a run for the touchline with nothing to stop them. The applause turned to anger and boos as the Croc played to the crowd instead of scoring, Karma bit him on the tail and the Lemmings managed to foil the scoring attempt in the closing minutes of the first half. As the teams lined up for the second half the Lemmings were down four players, three knocked out and one fatality, the writing was on the wall, the Lizards crashed through in the opening turns and this time took no chances and smashed a touchdown, the fans forgave them, there were several fracas in the crowd between home and away fans. Time however was against us and we had to call a halt early, which is just as well as the Lemmings were heading for a fate far worse than 1-0. 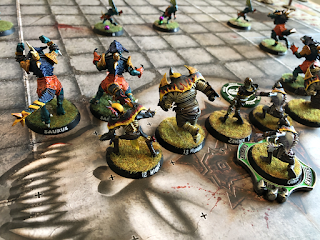 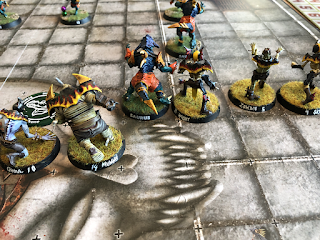 No matter when I have a coffee break a bus load of customers turns up, it has ever been thus and needless to say it annoys me, it is also never someone wanting a stamp, it is always a problem customer who doesn't know what's in the parcel or it has to go to Camp Polar Bear in the Arctic and will it need a customs label or is hand gel really a liquid while my coffee freezes. I had a bit of a moan, in a friendly way, with Ben who banks the cash from the Old School Brewery in the village and now when they turn up they bring me a lovely cup of Mocha just in case it is coffee break, how nice is that. 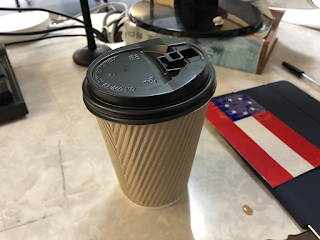 I have had a quiet time with maps over the festive season and what I have worked on were not complex and involved only a few maps, the English in Tangiers in the 17C, battles in India in the 18C and the Jacobites at Preston in 1715. I received two new projects just yesterday, Jagdgeschwader 52 in Hungary 1944-1945 and the Battle of Rossbach 1757.

Almost forgot, I am off to Vapnartak in York on Sunday, I have a small shopping list and some figures to pick up from Gripping Beast. I will also take the opportunity to have a look at some Italian Wars bits and pieces. Helion have also managed to get a stand this year so I will be popping in there to have a word with the editors and maybe spend my fiver.

Posted by George Anderson at 10:04