Another miserable, dark, wet night so it must be club night. This week I decided to once again bring my SYW troops out to play so they remain sharp rather than take it easy here at me casa waiting for visitors. I looked online for something simple but found the scenarios too small for four players or too big needing more than a 6x4 and oodles more troops than I have, so I settled on a scenario from the Honours of War rule book as a basis for the game.

The British were attacking a French force defending a long ridge line, Simon and I were the French while Duncan and Rob were the British, two brigades each of four battalions, two squadrons of horse and one light gun made up each army. Needless to say the British came bravely on with drums beating and Duncan's brigade headed for the small hamlet of Kunzdorf to anchor his right flank. I decided to march forward and meet him, Simon looked puzzled and thought we should have stayed on the ridge, but I was out for blood, I also thought I would throw my cavalry forward with typical French elan and take out the British cavalry.

Sadly I had mis-timed my cavalry attack and Duncan countered by putting an infantry battalion in a position to rake them as they thundered past, this upset my garcon's and they fled and dispersed, my second squadron now became the target of the British cavalry and this too routed from the field, however by this time I had brought up my own infantry and the victorious enemy cavalry were forced to retire. Over on my right Simon was now brought under fire from Rob's brigade and as casualties mounted he retired his infantry to rally and extend the range, the small village was now occupied by the Scots Guards. I moved my brigade forward hoping the volume of fire would offset the cover of the walls, it did not. 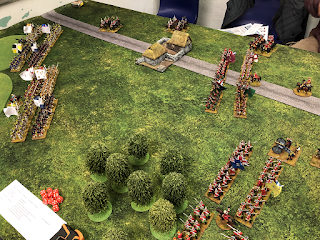 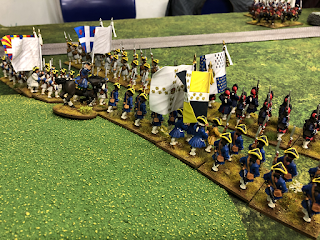 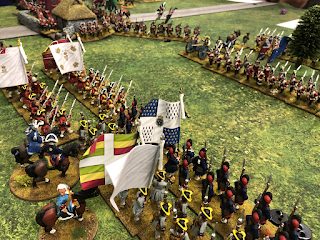 As the action heated up and the British slowly advanced they had the upperhand as we had now lost all the cavalry and one of our infantry battalions, as the light faded the British closed to close range and the Scots charged out of the hamlet into the French line. When the smoke cleared it was obvious both sides had suffered dreadful casualties, too many in fact and both withdrew bloody but not bowed. A draw. 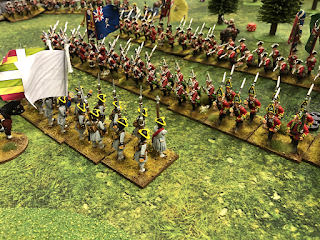 A furious game and very bloody, both had reached and passed their army breakpoints with six units lost, up until the last volleys it seemed that the British would emerge victors but it was not to be. I did not cover myself in glory as I messed up the cavalry and then failed to inflict decent casualties on Duncan. Rob had been winning until he got carried away and advanced to close range, Simon recovered and pulled a draw from an impending defeat with accurate musketry.

I was supposed to have a third game tonight with Matt over Zoom, to continue our Gembloux Gap campaign, he has had an accident to his knee and is of to A&E as I type, so that is not going to happen. My bad luck started much earlier in that an order from North Star did not turn up, I let them know and although they asked me to give it more time they sent a replacement almost right away, I got them a day ago. This was the package to complete my SYW project and contained the last two infantry battalions, sadly I got the men for two British battalions instead of a French one, I have once again had to get in touch and sent two of the packets back today as I do not need them and as they have already taken a loss did not want them to take another.

Time is flying by, I shall have the British cavalry I got at Vapnartak finished and based tomorrow while the French are already on the tray, I am cheating slightly as all the horses in these squadrons are black which allows me to get right on with the riders. 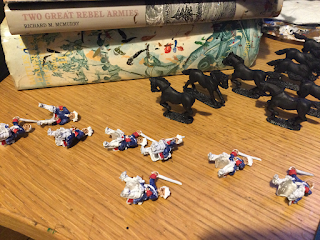 I went through my paints today and chucked out some which were almost done and others which are not used anymore, I also re-ordered a few more to have a full set when I do move on to the next project. In keeping with this I also ordered Helion's Volume 3 on the Italian Wars, which again contains my maps for the battle of Pavia. I also believe a Volume 4 is coming later in the year. 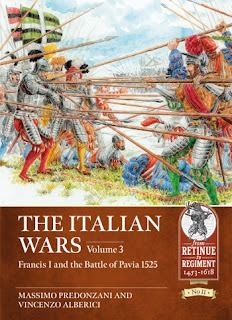 The Steel part of the title obviously did not turn up, but I thought it was catchy.

Posted by George Anderson at 18:44