Oh woe is me

I have a self inflicted wound at the moment, I have been mapping and painting like crazy over the past few weeks and now have a strained right arm and shoulder, I was painting three times a day for no more reason than I had the time to spare and was enjoying it, the maps were different as most editors of course wanted their stuff done yesterday. I have now caught up with the maps and have decided to cut the painting down to once a day if that, I need to learn patience with the new project, it's not as if I have nothing to play with.

I have just finished the first of many cavalry units, John Stewart, Duke of Albany who was in French service like many Scots and ended up a marshal of France. I have one more to add to the army, another Stewart who was the captain of the King's guard. The Foundry cavalry were nice to paint although the armoured horse seems only come in one stance with the head down. I now have all the figures to build a second large pike block, French troops this time, I also go some foot knights from Steel Fist for command figures and was very impressed by the quality. As these troops are French I went for crossbowmen instead of arqubusiers to front the pikes, not that they didn't use handgunners, I just wanted a change, I sent an order to The Assault Group but have not yet received them. 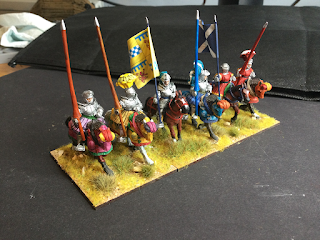 I heard the growl of aircraft engines outside the window last week and was surprised to see a CV-22 Osprey flying past, we used to get all sorts flying here, usually the RAF doing low level stuff with the three fighters they have and the odd Hercules. I notice the low level flying has resumed of sorts, although still at a level to stop eco-zealots complaining. So that is a new one to add to the Spitfire, Hurricane and Lancaster I have spotted. 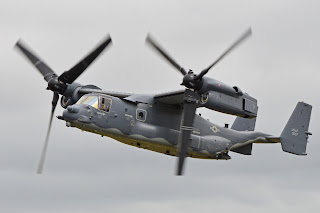 I turned my artistic talents such as they are to a family portrait a wee while back, I saw just such a picture advertised on my Facebook page and felt no compunction therefore as I didn't ask for them to advertise in turning it to my own advantage. 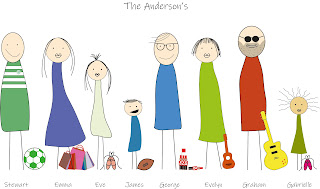 I should have been playing Chain of Command last night at the club, but I have been hit with an infection and it floored me yesterday, I am now on antibiotics and am hoping these will kick in before Sunday as my trip to Partizan might be in danger.

Posted by George Anderson at 09:49