Having recovered from my visit the Partizan next up was a Bolt Action game at the club, Jimi has built up a British force and was eager to get it on the table. We picked a scenario at random and it was Double Envelopment which meant we both had to get troops into the others deployment zone and if possible exit troops off the table.

I decided to play dangerously and looked at a Luftwaffe field force, they can have the French Char B as a flamethrower tank and as I have one why not, they get a couple of decent squads but the rest are Ostruppen  who are just rubbish, even I am not that desperate. Instead I went for a recce force (yes, that is me laughing) from the 10th SS Panzer Division, so I had two small squads, two bigger squads, an armoured car, a truck and a PzIII N. Jimi had three large squads, one small one in a carrier, an MMG and his bloody big tank, the AVRE with the spigot mortar.

We set up with half our forces in our deployment areas and then reserves could turn up from turn two, I brought on all my reserves except the tank, which decided not to bother, Jimi also failed with some units and his HQ. The AVRE was heading for my left flank as was the carrier and its veteran kill team. I pushed one of my small recce squads into a house in the center only to find the Churchill had a clear shot and unlike the last time it appeared it was on target, the house and my team were blown to bits, I should have known better.

A squad down but determined to put up a fight my armoured car started hitting the British in the center while hiding from the AVRE, Jimi, now desperate to push his advantage charged with his carrier, the little machine with a new paint job was hit by a panzerfaust and the passengers jumped from there into the teeth of a full squad of SS troops with two LMG's, it took a couple of turns but they were cut down to the last man. Soon after I also took out the MMG as it laboured forward on my right, the pendulum had swung. My tank now turned up after missing several turns, Jimi's HQ was still nowhere to be seen, the panzer got off one good shot and seemed to think it had done its bit.


As the fight in the centre and right drew my attention I grasped the first dice out of the bag in order to kill off another British unit, I had forgotten about the AVRE, it slowly ground its way forward and took out another squad which I should have moved first. The clock was ticking down and Jimi managed to get his tank and an infantry squad into my deployment area, I only had the armoured car inside his but I got enough points from wipe outs to get a draw.

A good game and Jimi must be close to a win now as his dice luck had vastly improved, well, improved, his HQ turned up just in time for the last turn. I can play Bolt Action but there are times when it just grates, the Spigot mortar on the AVRE has a range at best with the wind behind it of 100 yards, to load it the turret has to turn a certain way, the loader opens his hatch and cracks open the barrel like a large shotgun, his head and hands outside the tank, the charge is then loaded and the barrel slammed back into position, I doubt this was quicker than ramming a round into a normal gun. However in Bolt Action it is not a mortar but a heavy howitzer with the range to match, go figure.

I have been trying to rest my arm this week and so it has taken a bit longer than normal to finish the first ranks of my new French pike block. I have the next 24 ready to go once I decide whether to do the rear or middle ranks, probably the rear ranks as I still have some research to do on flags for these guys. 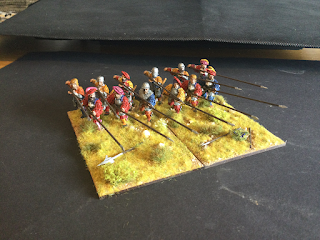 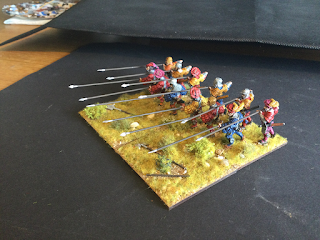 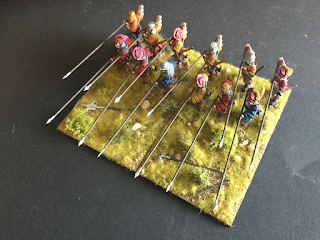 I have finished several map projects over the last week or so which again did not help the strain in my arm but these are more important than painting sojers, in order to help I have taken to wearing a wrist support which I should have done long before now. Just as I was getting a hold on everything I received more projects, some examples below.

Posted by George Anderson at 16:55