Well I have arrived safely back at Casa Anderson after an entertaining day out. I marched at 0815 and arrived at 1030 so not a bad drive and pretty free from road rage. As planned I missed the rush and marched straight in, again slightly miffed that my 'Concession' passed without a comment considering how good I look.

I had a plan and scoured the side of the large hall looking for products to fill my list, ABC Brushes were first, I got a mega bundle of 24 brushes for £15, a price which would get me 0neWinsor and Newton, then a bag of Empress Volksgrenadier LMG's, I found I was one short for my last game, and that just cannot be allowed to continue. Next it was grass tufts from Great Escape Games, I am not scrimping with these and the way the Italian Wars figures are based I have a lot more room for decoration. My next call was Wargames Foundry for a pack I forgot to order the last time, but having all this stuff in front of me I jumped for another six Gendarmes and a beautiful Demi Cannon, I will fit these in around the French pike just to give me a change from the infantry. There were no purveyors of GW paints so I settled on two matt sprays from a new outfit called ColourForge, new to me at least, they had samples of all their base sprays and I liked the look of the white and black so took a chance, they are also larger than most primer suppliers 500 ml rather than 400 ml and are cheaper. I circled around at the end to pick up a Helion book about the Battle of Aughrim, I drew the maps for this book and was intrigued by it, so spoiled myself. That concluded my purchases. Oh, I did pop along to Warlord to try and pick up a British Sniper Team for mate Jimi, unless everything went in the first half hour there was a very poor selection of figures and they seem to have concentrated on boxed sets of all sorts of stuff. 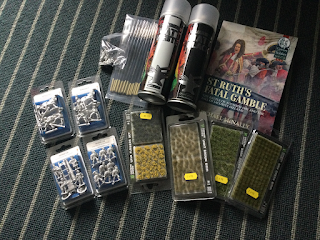 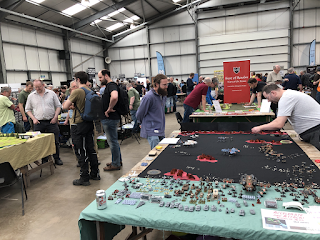 Once I had had my lunch in the car in the sunshine I headed back to look at the actual games. I go to York and see it as mainly a traders show with a few wargames. Partizan is a wargamers show with some traders, there was a participation zone which was mainly small games but some were exceptionally well done and looked very good. The rest of the games were in the demonstration zone and these were usually quite big and some were spectacular, the kind of tables which make you want to go home and start again. 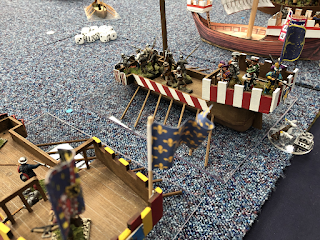 Wargame Slebs were out in force, I almost bumped into Michael Perry with his burger and chips, I am sure I saw Warlord Supremo John Stannard glowering at one point, TFL bosses Nick and Rich were in attendance around Nick's Arnhem scenario, Harry Sidebottom the author was signing books. I bumped into a few of my own favourites Phil Robinson (News from the Front) and pal David Bickley (Tales from GHQ), the crowd at Helion & Co. along with boss Duncan Rogers, there was interesting chatter about future projects. I also take the opportunity at these meetings to look at all the finished publications which contain my maps and I believe my head swells ever so slightly. I also ran into, for the second time ever, gentleman Ray Rousell (Don't  Throw a 1) and we had a lovely chat for a time, I even got an invite if I am ever in his neck of the woods. 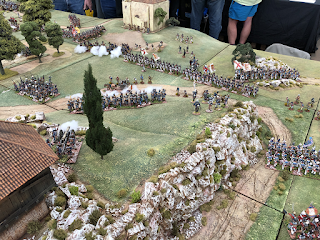 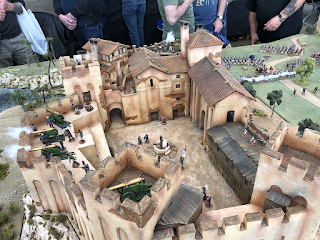 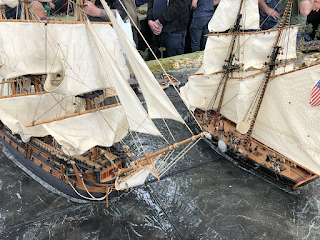 So there we have it, a grand day out, meeting interesting people and being inspired. A great hobby.

Posted by George Anderson at 18:01

Email ThisBlogThis!Share to TwitterShare to FacebookShare to Pinterest
Labels: Shows