Another beautiful night for a drive out and sitting in a stuffy classroom playing with toy soldiers. I decided to take my Seven Years War collection for a spin and spent an hour in between customers and mapping to find a scenario. Steve the Wargamer has a number of the old Tabletop Teasers on his blog and I found something which I could amend for the game.

I really needed a five foot wide table but we cannot do that at the club so I made do, at one end of the battlefield was a village, at the other a bridge, the vanguards of two larger forces had been sent to occupy both of these objectives, each had a cavalry brigade and an infantry brigade supported by a light gun, one objective was within easy reach of both forces so the commanders had to decided whether to take this first or strike out for the riskier one and pick up the easy one later. I also gave each the opportunity to call for reinforcements, which if they did would minus one victory point at the end.

I led the British cavalry and went on a wide flanking move to come in on the French right, the British infantry (Ian) would follow and move on the enemy/village. I got off to a good start until I got near the hill and then my Dithering general decided getting into harms way was not for him. The French cavalry (Rob) was being very aggressive and moved towards me tout suite, partly to give the French infantry (Jimi) all foreigners, Scots, Irish and Germans, room to deploy. I did manage to push my cavalry forward again only to be met by charging French troopers who succesfully routed a troop of horse, more charges followed always with the British cavalry on the back foot. Although I stopped the French my own cavalry had suffered greatly and only one troop emerged from the fray, Rob had been pushed back to reorganise, not the best of outcomes as by now the British infantry were up and ready to shoot.

Rob's gallant cavalry were in a bind as the French infantry were still in place behind him and there was no room to manouvre, Jimi also had a Dithering general and could not roll above a 2 to motivate him, it got to the point where we let him do a second roll just to get moving, he failed that as well, then I gave him some of my dice, nope this didn't work either, nine times he failed. Now the British infantry closed on the French position, Rob had no choice but to launch charges at them, these failed and like me he ended up with one badly damaged troop of horse to the rear of his position, to all intents and purposes able to support but useless for anything else.

At the very last moment the French infantry began to move, but again the lack of space prevented them forming a decent line and the British musketry supported by their light gun began to slowly tip the scales in the British favour. As night closed the French line was crumbling, the village contested, the bridge safe behind British lines so a British victory was recorded.


A great little game and perfect for a club night, incompetent as my general was poor Jimi's was even worse, his troops being unable to even march to the village within stone throwing distance, no one got that objective as it would have required a few more moves for the British to invest it, but the ending was never in doubt. The British infantry fought extremely well helped by the fact the French could not deploy into a proper firing line. The rules were the excellent Honours of War.

I now have quite a list of things coming for the Italian Wars project, Andy at The Last Valley is doing me poplar trees, Steel Fist and Casting Room Miniatures are (or should) be on the way and yesterday I ordered up the first of my buildings from mate Colin at Charlie Foxtrot, I got two grand houses and enough walls to give a decent courtyard, more will come but these will get me started. Meanwhile I have added the middle command ranks to my Italian pike block, I am on a mission to finish this unit by the end of the weekend so that I have the decks clear for the new stuff. Julian is looking to try out the rules so we are hoping to have our first small clash next month. 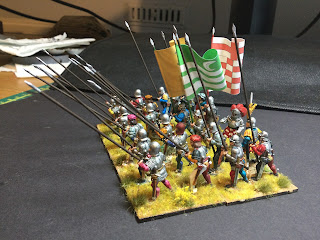 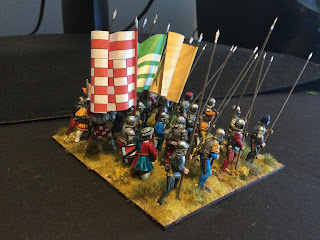 Next week I should be playing with Stewart Simon's lovely ECW figures as we are going to try Forlorn Hope after my disastrous clash with Pike and Shotte.

Unless you have missed all the hints I am retiring and closing the Post Office on 31st August, the Save Our Post Office campaign has not yet materialised thank god, although my wishes in that department are well known. 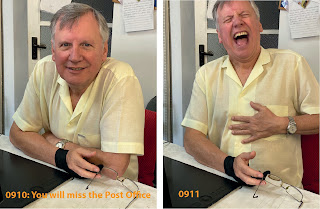 The guy across the road in Washington House has a Vote Green poster up, it reminds me of the guy who had had enough of the modern world, drove into his garage, taped up the car windows, the garage door, turned on the engine and sat back. A neighbour called the police a day later and after breaking in and giving the driver a sip of water found out he was fine. He drove a Tesla. Oh I do hope the Green candidate comes in here, any of them for that matter, pleeeeease.

Posted by George Anderson at 11:10