I have ticked off several things on my project list over the last few days, the new building, the Bren gun team and now my latest vehicles for Bolt Action, this leaves one building and the other half of the reflocking to do.

These two transports are Father's Day presents from my sons, one each, this helps enormously as I have a large list of vehicles I want, nay, need. First up is the iconic SdKfz 251 Ausf. D, I went for another take on late war camouflage, so nothing is standardised with my Germans, and after checking things out online this is pretty much realistic. I have added some stowage and was toying with adding some greenery as it was popular on armoured vehicles in Normandy but for the moment I am leaving it as it is. The rear machine gun points up as this was the best angle to glue it to the rear mount, there is no decent connection on the top of it and I think this way it will be safer or not as easy to knock off. There is just something about this machine, it is undeniably cool and I like its little brother the 250 even more. 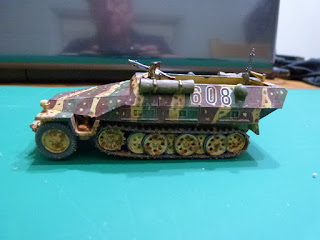 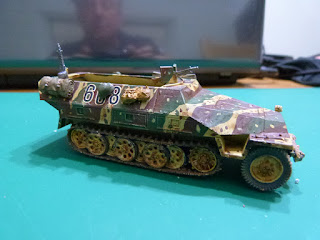 For the British it should have been an M5, but after seeing some pictures of the only one available and the shoddy work on the metal parts I decided on the plastic M3. The first thing you will notice is the lack of weapons, British practice was to use these only to transport the infantry to the battle, not to use the vehicle in a support role so in the main these, unlike the American versions, have no guns. I have also been sparing with the transfers as most photographs of the real thing do not show a lot of markings, especially the stars, so I will put the air identification star with the circle on and go easy on the others. 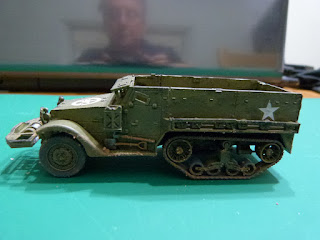 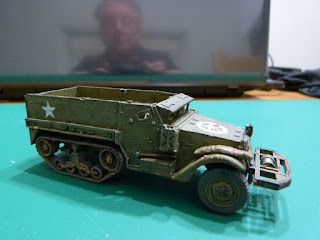 These were very easy kits to put together and paint, I had a slight problem with the M3 body but nothing a bit of pressure couldn't put right. I have an urge for a couple of tank destroyers next, maybe a Marder and an Achilles.
Posted by George Anderson at 21:14