As I have come to expect, another dreich night heading into Lancaster, it was Napoleonics with Andy, Stuart and Simon using Black Powder, so I traveled light, dice and tape measure. Andy had settled on the battle of Rolica from the BP scenario book about which I had not a clue.

It looked like a decent little club game, Simon had four battalions and a gun while I had two and a unit of cavalry, we were the French, however we had a long front to defend and were spread thin with no reserves. I had the right flank and it looked decidedly weak, right opposite me was two battalions of riflemen and two cavalry units, in the centre was a full brigade of British and the same on our left, it looked like I would be home early. 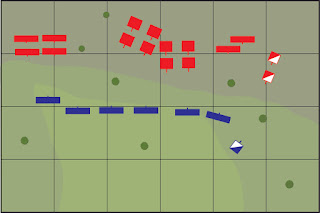 Sure enough the British came straight at us, my cavalry was charged and against the odds sent their opponents running, as the lines came together the British lost two battalions trying to budge our defenders, things looked just dandy. The second British cavalry unit came in and although I was forced to retire my horsemen, they did not break, more time wasted as the clock ticked down. On the left Stuart made a serious attempt to dislodge Simon's anchor battalion, but these stalwart lads held as the red tide surged against their line, with the help of a Swiss battalion the British right was thrown back in disarray and lost the will to continue.


Meanwhile in the centre the British were again held and forced back, it only needed a couple more routs and British morale would have collapsed. The clock struck ten and that was it, a surprising French victory despite the odds being stacked against them, and a great little game. It may have been different if the British left had been more aggressive but several bad command rolls took their toll on Andy's plans and my cavalry managed not to die.


The Garde Ecossais could be getting varnished by the weekend, I seem to have my painting mojo back. Next up are British grenadiers, I had thought of making each stand different as they were pulled from different regiments, but then thought that might be too much of a faff, so I have decided to do half and half from two different regiments.

I have also got a few British and German WWII riflemen coming as I need the odd figure now and then for Bolt Action and if I use all the squads I have I have nothing spare. I also took delivery of a package yesterday but am keeping it back as a surprise.

Stuck for something to paint by the other night I found the updated 'Das Boot' series (Sky Atlantic, I think) and the first ten minutes had me glued to my seat, great find thought I. This didn't last long, the usual but very unlikely gay couple turned up in episode three, it was so unlikely it reminded me of 'Allo 'Allo. By the halfway mark some of the story lines were so insane I started to fast forward through the action ashore and only watched when at sea with the U-Boat, at times even that was a struggle. A great pity as the production values are spot on, you might like it, but I will stick with the movie although the first series from the '80's has been recommended to me. 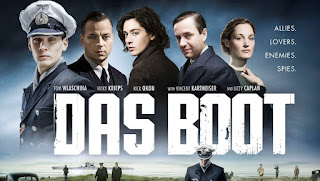 My BBC licence has now gone, the only thing I miss is the News at 6, although usually having seen the headlines I switched it off, I now have to talk to the missus, I wonder if the BBC will have me back? I complained about a news item last week and got my reply yesterday, they didn't know which interview I was complaining about so could do nothing about it, I had told them the date and time, which channel and who was being interviewed!
Posted by George Anderson at 09:46