Another dark and dingy night for Club Night, although I notice the days getting that bit longer, snow on the hills has gone but it is cold.

Alex who was new to X-Wing asked me for a game this week, as he also flies Imperials I thought I would take the Rebels for a change, they don't get out of the box very often. I wanted to keep it simple so looked around online for some inspiration and decided to go with four named X-Wing pilots, nothing fancy but the X-Wing is a pretty decent all round fighter as you would expect.

The Empire turned up with three Tie Interceptors led by Soontir Fel, apparently he is an Ace pilot, I don't know that much about the Star Wars universe but the card is a good one. I started off with an advance and a turn to meet the enemy, I survived the salvoes which came at me and started to return fire, I had all my ships target lock one Interceptor and ganged up on him, at the end of that turn he was space dust. The rest of the game turned into the same routine, my ships kept together and the sheer volume of fire took care of the rest, a win for the Rebels and one of my few solo game wins. Alex's die rolling was superb in attack but rather useless in defence, my own were pretty good on both counts and the target lock ability was deadly to the Imperials. 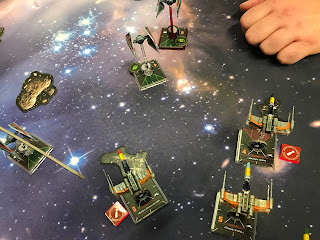 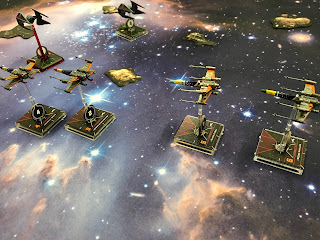 We had time to play a second game, the line up was the same and I started off the same way as game one, it took slightly longer this time but I still managed to concentrate on one Interceptor and put him away. Then it all went wrong, I don't know what happened but I screwed up my movement something terrible, some of the manoeuvres when turned over didn't make sense and I suffered for it, I lost one X-Wing and found it hard to concentrate fire on one ship. As time ran out I lost a second ship and my other two were not going to get close enough to do any damage to the enemy, which was a shame as both of them only had one hull point left.

A good run out for me and two enjoyable games, the four X-Wing combo was very good, I do think the Imperials lack a decent ship to combat the X-Wing, I know people say that the Imperial ships are more manoeuvrable and that they can have the numbers, but I don't buy that. Besides you have to be a very good player to keep control of say six Tie Fighters, and that is not me.

A busy night at the club, a WWII Battlegroup game, a Dark Age/Fantasy skirmish, Frostgrave and Roots (murder and mayhem with furry creatures), almost a full house. Napoleonic next week, Black Powder.

Oh dear, Rubicon have just announced a JagdPanther turning up in a week or so, I suddenly realise I 'need' one. 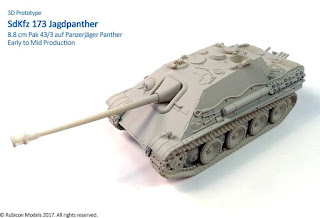 Posted by George Anderson at 09:53