Muskets and Tomahawks last night, I arrived a bit late so the terrain had all been set out and as I chose to be British I was handed my OOB and orders. There was a French spy around, a Jesuit priest who we had to apprehend while keeping the unruly savages at bay, as we were the vanguard our forces arrived piecemeal so for the start of the game and most of the rest of it I had two light companies. To get further troops we had to reach certain points on the table, so it was my own fault I left my regulars to near the end.

As my Jocks set about reaching the first reinforcement point it became apparent that there were a lot of Indians in them nearby woods. I thought here was an opportunity to get some points by wiping out the savages while holding the left flank as Rob made his way to rescue the settlers near the river. As ever my shooting was terrible and it took me a long time to make the left secure, so much so I did not make my way to the next reinforcement point until almost too late. Rob meanwhile took cover in a redoubt while the women we had to rescue huddled in a nearby building, a bunch of very brave Indians was whittling his men down despite the cover. What about the priest, well that fool was running about in circles getting nowhere (dice led), but always just on the other side of the river so we could not get at him as French irregulars began to arrive. He eventually made it to safety. 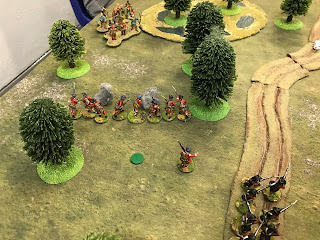 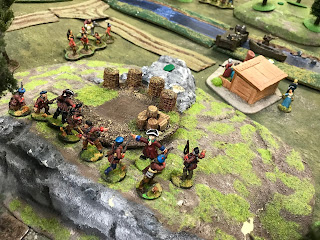 An Indian chief called out Rob's commander to a duel, and in front of their men they set too with gusto, cheered on by us on the sidelines, the combat was ferocious but not deadly and eventually each was dragged away bloody and exhausted by their men. They returned to the fray a few moments later and this time the savage did not survive, huzzah!


I had eventually cleared the forest to my front and moved on the remaining Indians in the centre, the regulars had now arrived and a volley sent them to the happy hunting grounds. With the women safe, apart from one unlucky madam, the British began their withdrawal. It was time to count up points and I felt fairly confident, I had stopped Julian from scalping most of my dead and had dealt out a fair amount of damage for a score of 16. Ryan had saved the priest and leapt forward with around 32, Julian had captured a donkey and a maid so again reaped huge rewards, Rob had saved most of the women so again needed a calculator to add up his points. I was last, and last by a long shot, despite having wiped out more First Nations than John Wayne while holding the left flank.

Another good game and a lot of fun, elsewhere we had a rowdy RPG and Deadzone going on, I am playing Deadzone next week.

My last (for the time being) WWII kit, the Sherman arrived very quickly from Rubicon, as with all their kits you can choose which tank you want to build, with this kit you can build four, not much difference in three of them until you come to the Firefly version. My British needed a bit more punch to tackle the Germans in Normandy, although they do have a M10 tank destroyer with a 17pdr, now they have two with the addition of the Firefly.

You can go mad trying to work out what green was used by Allied tanks and what is the best equivalent, I use Russian Uniform, drybrushed with the same colour with some white added, the tracks are Track Primer and the rubber on the wheels Dark Rubber. I had decided to use mud (MIG Europe Dry Mud) on this vehicle but found on opening the tub it had solidified, so no go there. The lower surfaces were drybrushed with Flat Earth. I found some bits and pieces to put on the rear deck, you can't put too much on due to the long 'bustle' needed for the recoil of the 17pdr. The markings are for 29th Brigade, 11th Armoured Division, at first I put the blue squadron markings on, then decided you could hardly see them on the green back ground, so I overlaid yellow markings, but these again are not as bright as perhaps they should be. I then realised that the number 53 on the chassis went with the blue and not the yellow, this of course played on my mind until I eventually replaced them with the proper number, 52. No, I must not paint over the yellow, daft idea..... 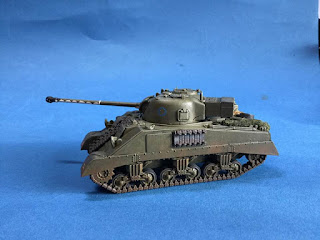 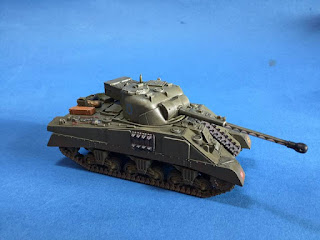 I had noticed before the strange wavy pattern on the end of the 17pdr gun, I found out that it was to disguise the length of the barrel, the Germans came to fear the killing power of the gun and as there was only one tank in a troop armed with the 17pdr, if they could they would knock that tank out first. Quite clever and maybe enough to allow the British tank to get the first round off, a bit like the false bow wave on a ship to confuse U-Boats. You learn something new all the time.

I finished my extra WWII infantry this morning so it will be on with the SYW grenadiers now.
Posted by George Anderson at 09:08