Another bunch of Scots for the Seven Years War with more to be added later, I had a look at the Perry AWI Highlanders and think they would do for a couple of battalions and fit well with my Front Rank figures. There is also one more Scots battalion I can add to the French. So the long term plan for the rest of the year which has just come to me, is the Highland battalions for the British, Scots and Irish for the French along with another artillery battery and cavalry regiment for each and we will see where I am after that.

You really have to fit the uniform to the figures with SYW, and I think the only thing with these troops was the missing shoulder tab, which I could have painted on but didn't and the cuffs which I did paint properly with the blue slash. I get all my information from the Kronoskaf site which I take to be correct in most details and is a fantastic research site for wargamers, I even gave them some money. 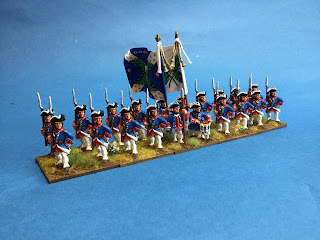 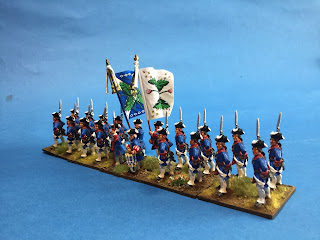 I have got the Bolt Action bug again and having got the Tiger I cheap I decided as you know to buy the newly released Jagdpanther, I also got a few more figures to add to the infantry, and of course I had to even up the odds for the Allies hence the Firefly (which wasn't called a Firefly during the war but is recognised as such today). I got it built the same day it arrived and am now in the stages of painting it. 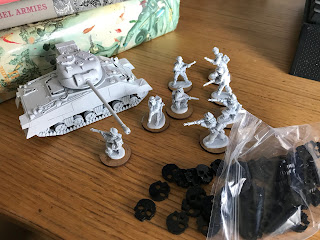 I also got myself some black acrylic skull markers for stamina in Black Powder and team casualties in Bolt Action from the excellent Charlie Foxtrot Models, Colin even put in some further examples for me, it pays to have friends in the hobby. His wonderful Eastern Front buildings are almost enough to tempt me to get Russians.


Son Stewart is coming over this coming weekend for some games, X-Wing on Saturday and War and Conquest on Sunday, the latter will be a 'training' game as we have not played for a while and I have organised a WAC weekend here in April. There was to be six of us but we are now four, so I am looking forward to that.
Posted by George Anderson at 09:56