I seem to be having a pre-holiday spree at the moment, the Tiger was an impulse buy because the price was right but I have now added the new Rubicon Jagdpanther. It arrived the other day in a nice solid package, perhaps they have learned that the kit box is not sufficiently sound to leave to the tender mercies of couriers, they also are very speedy with their deliveries.

Again the kit comes with two variants early or late, so you get two hulls, it is a pity you do not get some extra bogies or tracks as you could make up a very nice wreck. I went for the early version as that is the one which would most likely have been in Normandy, not a lot of difference between the two, the main one being a two part gun barrel and different mantlet. A very easy build, again smooth tracks but not as noticeable as on the Tiger I. I remodeled the skirts by cutting out a section on both sides. 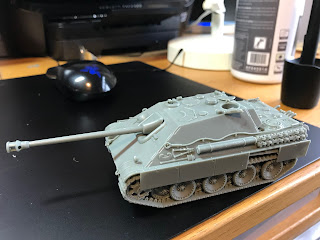 There is a very reddish brown stripey pattern which seems quite popular with these vehicles and also normal Panthers, the one in the tank museum is painted like this, but I don't like it so I went for the scheme used on a vehicle in early '45. From the print I was also unsure whether two greens were used or it was just the artists way of showing the light, anyway, I went for two greens. This time I base coated the tank in Green Ochre as recommended on the box, personally I think Dark Sand is a better base for Dunkelgelb, but hey, it's done now. I used Luftwaffe Cam. Green for the green and then added some white to get the lighter colour. After this it was a watered down wash with Army Painter Soft Tone and then a dry brush with Dark Sand, the tracks and lower surfaces got another dry brush with Flat Earth. At this stage I usually put a little rust on here and there, very sparingly. A light dab with black on a sponge along the edges and voila, done. 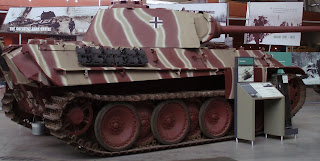 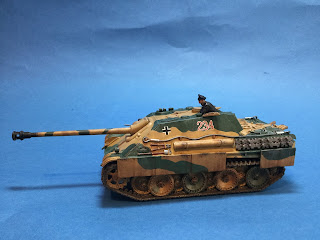 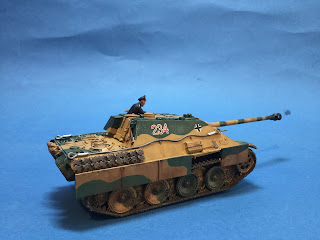 I also felt the need to even things up so ordered a Sherman 'Firefly' this morning, it is now on the way, well done Rubicon. Now I need to get a big game to get them all on the table, one day.
Posted by George Anderson at 10:56