I was unsure what was happening at the club and how many were turning up last night, Stuart offered several suggestions and a try at the new GW Warhammer "Age of Sigmar" was top of the list, however true to form Stuart took delivery of the new "Frostgrave" rules from Osprey and brought them along instead. 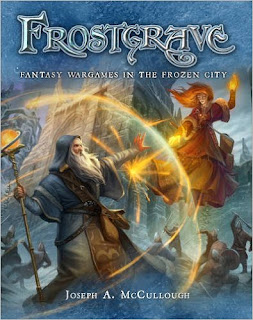 "Frostgrave" is about battling wizards carrying out quests in a city destroyed by ice, nominally for two people but we managed four quite comfortably. We each had to build a squad of adventurers around a wizard and his apprentice, the wizard had to choose from a certain path, which gave him certain spells and then he could take so many spells from other magical paths to boost these. I took along a thief, tracker, soldier, crossbowman, man-at-arms and a thug (almost the same guys I have a drink with on a Wednesday), the others took similar groups. Our aim was to traverse the frozen wastes find some treasure and escape with it, skeletons were roaming the area and turning up as if by magic from a tower in the centre of the play area, just where most of the treasure was lying. 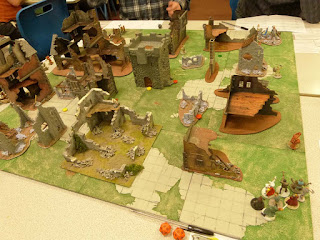 At first we all concentrated on killing the skeletons and picking up the easy treasures, then we headed for the tower and before long we were involved in skirmishes with the other wizards. We must have been the worst Wizards in the realm and should have taken refresher classes at Hogwarts, you have to make a certain die roll for each spell and if you fail you can end up hurting yourself as the spell fizzles and disappears. I think we had several Wizards down to half strength due to their incompetence, but now and again there was a spectacular puff of smoke, a rent in the universe or mysterious runes turning up, we never did find out what the runes did as it was deemed prudent not to go near them. Although I had lost the soldier I did manage to get most treasure markers so was declared the winner.

It was a night for fantasy as seven other guys were playing a long running D&D campaign next to us. I have to admit I would rather play Sci-Fi than fantasy but it is one of the advantages of the club that you can try out something new every now and again before you decide whether to invest or not. My introduction to Muskets and Tomahawks being a case in point although I won't be getting my own figures until I fulfil my needs vis-a-vis my ancient armies.

I did read a bit of fantasy a long time ago and started with a guy called Thongor of Lemuria, I have never forgotten that after a long day of slaying palace guards, evil familiars and picking up the odd crown to eventually rule an empire he liked nothing better than to quaff flagons of ale while eating roast Bophur haunch and chips, OK I made the chip bit up. Then of course there was Conan and another character called Tarl Cabot who lived in or on Gor and got around on the back of big birds, after those that was pretty much it for me and I turned to Sven Hassel. I am talking 70's here remember. 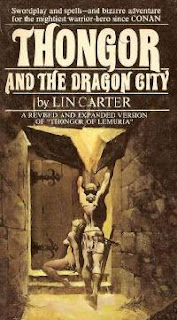 Next week Andy is introducing me to Bolt Action, I have watched some of the YouTube videos and am looking forward to giving this a try, I realise there is a bit of contention over the ranges but at least everyone gets to move at some point and you know I don't like the other WWII game. Although I do not like CoC I follow two excellent blogs which do, so pop over to Wargames Table and Tiny Hordes and give them a look.
Posted by George Anderson at 08:02