I am old enough to remember the Roman skit from Billy Connolly's first comedy album, and it seemed appropriate yesterday as you will find later. I spent a very enjoyable day with my grandchildren on Saturday, enjoyed a lovely meal and stayed over in an excellent little inn, fortified with the full English I picked up my son Stewart for our game in the meeting room of his workplace. Another 'training game' he with a mocked up Western Frank army from my Saxons and me with my Romans.

Stewart had indeed changed his army from our last encounter, he had three cavalry units this time backed up with some elite infantry along with some axemen and only two units of the lower orders, he had also brought along his first home grown unit of infantry, it would be interesting to see how they would perform. I had only tweaked my army slightly, I lost some of the skirmishers and took a Legate rather than the Emperor to save points and bring my Cataphracts to the table, the backbone of the army remained three cohorts of infantry, one being veterans.

There isn't a terrain deploying system in War and Conquest apart from fairly commonsense suggestions but we need something better, Stewart obviously wanted an open battlefield while I wanted to cut it down. Any army fighting a battle will try and make sure the terrain favours its fighting style but as wargamers we need something which is fair to both sides. I dug out my old WRG books and as I used that system for ten years it should fit the bill. The table size gave us two terrain pieces each, before placing you dice for the piece and depending on the score you either have to discard it, place it in a specific place or place it anywhere. Stewart took two open areas and got to keep them, I had boggy ground and broken ground, the bog went but I shortened the left flank with the broken ground. I do think there should be more hills albeit it gentle not crags or mountains but we will see how things go in one or two more battles. I had come up with a dice system but it is too erratic, you can have nothing or too much.

The Franks deployed with a heavy cavalry left flank supported by infantry behind, an infantry centre and a unit of cavalry way out on the right, he had drawn Test of Strength which meant he had to get a unit into my deployment area while having no enemy units in his. I think this is what the lone cavalry unit was for while the rest of his army held me off. I got Take and Hold, which meant I had to take the centre of the table while keeping the enemy at least six inches away for a whole turn, my plan therefore was to advance the infantry while keeping an eye on the lone cavalry unit, my horse archers hopefully would add some casualties to the enemy horse before the cavalry clashed. 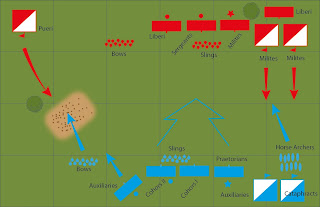 As the battle opened I advanced my skirmishers and they took a beating and fled for the rear, I managed to stop them leaving the field and when they came back they were sent to the left to destroy the annoying lone cavalry which they eventually chased away with heavy losses. My horse archers got nowhere either, were charged and also made for the rear, these too were rallied and came back to support my Auxiliary cavalry. My infantry took the centre being helped by Stewart's plan to hold, game over in two moves! That wasn't going to fly so we simply decided to continue the game as a normal battle.


The Frank cavalry came on determined to sweep mine away, they hit the cataphracts first but despite being elite they got halted and then slowly but surely lost the fight as they lost men, the cataphracts seemed unphased. The second Frankish unit smashed into my Auxiliary cavalry, it looked like a fait accompli but no, the Auxiliaries held and actually won the first round of combat, in the second the horse archers joined in with a glancing attack which brought more Franks down and then a heroic effort by the Auxiliaries wiped them out. In the centre the infantry had clashed, the enemy skirmishers were sent packing along with two battle formations, the only bright spot for Stewart was that his own unit had beaten my veterans and captured my Legate. Just as he was celebrating the cavalry fighting the cataphracts broke and the armoured Romans hit the remaining Frank infantry in the flank and also sent them packing. Game over for real this time. 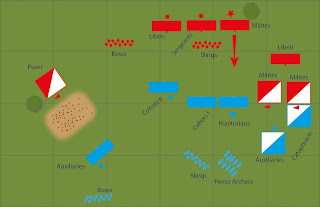 How was the game from a wargaming point of view, well I am not a fan of the objective cards but have to know them for the tournaments and only occasionally do you get a daft result which ends the game without any bloodletting whatsoever. Stewart's plan to harry my flanks while holding off the better Roman infantry was sound, but this meant it would have been disaster for him to contend the centre as he wanted to have the infantry fight as late as possible. I suspect we may drop the objective cards for home games in the future. He had trouble killing the cataphracts and bad luck against the Auxiliaries which he should have beaten, their die rolling was exceptional as was the glancing attack. My skirmishers lost out big time, I should have given them light armour or shields but forgot, I won't next time. I used the Praetorians as my veteran cohort to get them on the table, and as usual I was disappointed that my elite unit ran away and my Legate was captured, but in hindsight I asked too much of them against Stewart's elite spearmen, but I will keep my eye on them. 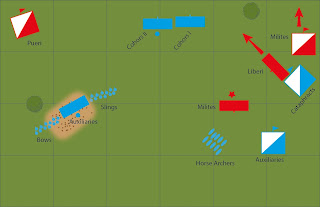 Perhaps the Romans are a tad too much for a Dark Age army to contend with with their myriad choices of troops for every occasion, next time I shall pit my Saxons against the Franks, also Stewart should have more of his own men by then, perhaps they will fight better, I hope not.
Posted by George Anderson at 12:05