The postman has been very good to me all week and as a person with some pull with the Royal Mail my parcels have been delivered in record time, mainly for him to chuckle at the little men inside and make what he believes are hilarious remarks.

I have now received almost all my stuff, the only thing I am waiting on now is the Blitzkrieg armoured car, but I am beginning to have my doubts I ordered it, I thought I had done that with my universal carrier but it turned out that I had only looked at the site and decided to buy it instead of actually buying it. I just took a moment there to check and I did buy it, phew. All the companies I have dealt with have been terrific, everything has been sturdily packaged and sent within days, I was especially impressed with Warlord Games.

I have also been more than pleased with the figures, they are all a joy to look at but my favourites are the Crusader British infantry followed by the Black Tree motorcycle combination. As you can see from the picture I have based and primed my two British squads along with an officer and his batman and am hoping to get started on Monday unless I bring BA-Day closer and find some time on Sunday, but I doubt it. 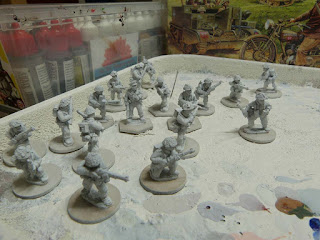 I have been spending a lot of time on YouTube and other sites getting tips on basing and painting as if after 50 years of wargaming I need them, but there are some lovely examples out there to follow and much to aspire to. I do wonder however when it comes to some of the techniques on 1/56 scale vehicles, the endless coats of paint, the weathering, the hair spray method or the use of salt and sundry other dark art practices to make the vehicle seem real, will it matter on a wargame model? Sure I will be weathering my vehicles and trying as best I can to make them look 'used' but the wife's hairspray is safe.

I should think by next weekend I might have a squad complete, although I do have pressure to complete two map projects I still have to have some 'me' time, but I do need to recuperate the money for these guys as well as more for their mates.
Posted by George Anderson at 12:59