It is quiet, windless and slightly damp, it is clear and I can see all the way over to Ingleborough through the gap and the big horrible windmills are standing stark against the skyline, they must have been the best thing to happen to whoever owns that godforsaken piece of useless scrub, ching, as the subsidy pours into their wallets. I am doing my bit for that as a business owner I pay more than you for green renewable's despite the fact I am not in agreement with most of their madcap efforts. Nothing moves in the village, no new neighbours as yet, the drama group are bringing a bit of culture with Shakespeare's 'Twelfth Night' in a few weeks, I probably will not be attending as my backside does not react well to several hours sitting on a plastic chair.

A couple of walkers have just passed the window along with a cyclist, all equipped in the latest latex fashion showing all their knobbly bits along with their fluorescent hair bands, jackets, and warning stripes just to make sure you understand you have to get out of their way as they power walk or weave in and out of the traffic.

Talking of culture I went to the theatre last week, not to see an Alan Bennett play or Shakespeare but to see Stewart Francis a Canadian comedian, he is droll, uses a lot of puns and is clever with them. The warm up comic was a lady also from Canada who was dire, she hardly drew a laugh and I was beginning to actually feel sorry for her as her half hour came to an end, she bravely carried on despite knowing all was not well, bless her heart. I don't like women comediennes or do they prefer comedians these days, well to be honest I don't find them funny, there are a few exceptions but in the main they leave me cold, like black comics who can only talk about white people, women tend to talk about women's troubles or relationships with men. Anyway, as Stewart Francis came on I started to warm up and was laughing, not fit to bust, but thoroughly enjoying myself while a sideward glimpse at the missus showed a face which would have been appropriate on one of those Easter Island statues, I guess what counts as humour cuts both ways.

I forgot to mention last week when travelling around the country and getting held up in traffic that no matter which lane you are in it is always the slowest. On both sides cars or vans you mentally register suddenly disappear into the distance and you think, no problem they will stop in a minute and I'll catch up and renew our acquaintance, but no, they are gone gone. So you indicate and pull over if there is a gap into the 'fast' lane only to find the lane you have just left ploughing ahead and leaving you behind. No matter what you do you are stuck. Then of course there are the, usually expensive, cars which zoom up the side despite being warned that the lane is closed ahead, you sit in the queue hoping that the people up the front won't let them in because you wouldn't only to find them gone when you get there.

I haven't picked up on a lot this week as the news is dead to me just now, it is either the American election process, which frankly baffles me, or it is absolute tosh about the EU, so I reach for the remote. I usually do not comment on American leaders as I take the view that I do not know enough about them to make a comment, was George W. Bush really stupid, I would hope not but I didn't vote for him. The thought however of Donald Trump being in the White House does scare me, I gave Reagan the benefit of the doubt as to me he was simply an actor, but he was obviously more than that, but Trump? I'm speechless.

I can't go of course without this weeks PC news. Bowdoin College in the US has offered counselling to students who were to attend a tequila or Mexican themed party where they were given small mini sombrero's to wear on the grounds they may have been 'injured and affected' by the wearing of the same. I believe in the same college the caterers were taken to task over offering Chinese dishes which had obviously not been cooked by real Chinese people. 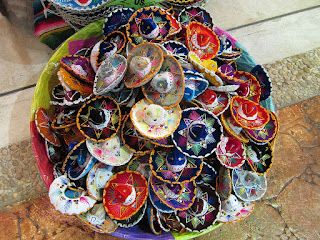 And don't laugh at the Yanks, I saw a Facebook page of a wargame show here in the UK recently where the poster had gone to the effort of informing us that he had tried to exclude children from his photographs and where this had been impossible he had put a white circle on their faces! Now this begs the question, was the kid white and would not a black or brownish circle have been more appropriate, you see where this ends up? If he had not pointed this out then I, like everyone else on the wargame group would simply have noticed the wargame!


I am having to bend to public pressure this week and mention my son in Chorleywood who, when I visited last served up an excellent lentil soup and steak pie dinner along with copious amounts of fine wine, his daughter who kept me entertained and his wife who looked after me. I hope this matter is now settled and the View will return to normal editorial standards as of next week.

Posted by George Anderson at 10:07