Pretty dismal weather here for Easter, but then again it is pretty early, I found out the other day that the various Christian churches have been trying to come to an agreement on the date of Easter for over 1,000 years and they are hopeful it will happen in the next ten, doesn't fill you with confidence about the power to get an agreement on something by talking about it.

Anyway, what did I do over Easter, cooked an Indian meal on Saturday which I needn't have bothered with as I would have got the same effect if I had poured a tin of extra hot curry spice down my throat, I had been in Scotland and picked up a carton of this particular curry sauce having memories of how lovely it was, my memory obviously is not what it was.

Following on that disaster I found a note in my letter box saying there was a parcel for me at the local Sorting Office as I had not been in when they tried to deliver it. I was in at that particular time as I was having my lunch, which angered me even more as I have a notion it is the German armoured car I have been expecting and would have built this weekend. Someone is going to get it on Tuesday when I arrive at the Sorting Office.

What went right you ask, well I managed to all but finish my British support weapons, sniper team, mortar and PIAT team, they will be all done by this afternoon and I will endeavour to get a picture up in the next day or so. I also managed to build and paint my Universal Carrier, I am pretty chuffed the way it turned out, the mudguards don't fit properly and I am not the only one who has identified that problem, but I managed in the end with the help of my hobby knife. I applied some rust and washed it in, again very pleased, I then applied the mud, it was a very camp, pinky colour in the tin, but it dried like.....mud, excellent product form MIG. I used a couple of rust colours on the tracks forgetting I had a base colour especially for tracks but again I am happy with the result. 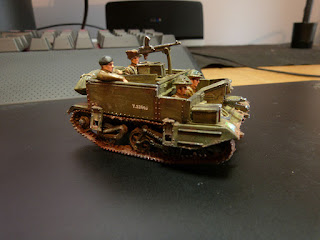 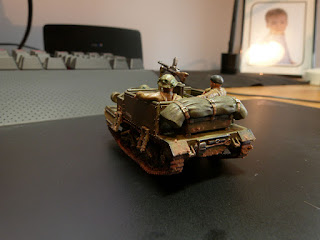 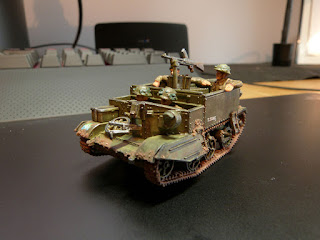 I also managed to get a lot of work done on my Germans squads, these all have smocks and are therefore in camouflage, army camo not SS, these are Artizan figures and again not hard to paint. I have seen some painters manage to get waffenfarbe and insignia etc. on to the smocks or tunics but unless it sits out on the model I am going to leave it, these are for wargaming not a painting competition. I will however have to look out some late war infantry not in smocks as these were far from universal.

I have been perusing photographs of British and German troops in Normandy over the past few days and this one made me chuckle, he has got to be a Jock.