I have been drawing a lot of maps to do with WWI recently which is no surprise and most have dealt with the Somme with the odd one on the aerial war and a couple on tanks, when I was given the material for War In The North Sea I was a bit nervous as I would be required to map out the battle of Jutland along with some others. The maps were brought forward so I had to drop everything else and complete them.

I left Jutland to the end and concentrated on some smaller actions along with the battles of Dogger Bank and Heligoalnd Bight and an interesting raid on a British convoy in 1917 by two German cruisers which hit the convoy, sank the escorts and made it back to base despite being hunted by six British cruiser squadrons.

I have read about Jutland of course but many years ago, however drawing maps of the action brings it more sharply into focus, especially as it is possible to see photographs of the action right down to the moments where British ships are blown to kingdom come.


It is incredible that the the most powerful weapons systems of the time were still controlled more or less the same way as Nelson's ships at Trafalgar, which, with the smoke and poor visibility was sheer madness, although unlike at Dogger Bank it did seem to work from a tactical point of view. Wireless was available at Jutland but it is uncertain how much use was made of it, what we do know is that communication or lack of it was a big problem for the British throughout the battle.


I was trained in the use of the same flag system when I joined the navy in 1968 and the Fleetwork book would have been easily understood by a Yeoman on the bridge of HMS Iron Duke in 1916, I did not use it until I joined HMS Sheraton and then it was my job to decipher fleet (3 minesweepers) movements. We only ever used flags once on a very clear day.

Not until I finished the series did it hit home to me how lucky or brilliant the German fleet had been to escape destruction, they had managed throughout the hours of darkness to basically keep their position secret and although found and attacked by the trailing British destroyers they still managed to keep behind the Grand Fleet and sail home. 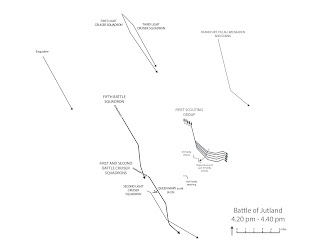 Despite the losses I don't see how anyone can argue that Jutland was not a victory for the Royal Navy, not the one they wanted and they had suffered some grievous losses however it was the German Fleet which had fled and we now know in hindsight would never again dare to challenge the British. The blockade which slowly strangled the Germans would never be broken.

With renewed interest in the battle I found the BBC documentary on iPlayer, and despite Dan Snow and some guy I had to hide with a towel sign languaging me, seemingly you don't get to use the on/off button if the BBC deems it, then why have one? As usual merely telling the tale was not enough and Dan and Co. set out to discover why the British battlecruisers were susceptible to blowing up, if they had just read any one of a number of books on the battle they could have saved themselves some trouble. 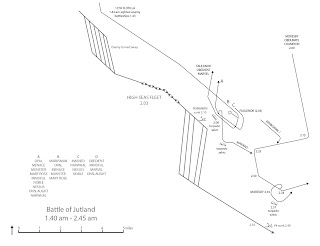 Still on WWI, if you missed the superb documentary last night entitled "The Somme - The First Day" then jump on iPlayer now, grab a beer or whatever and lose yourself for an hour, I eagerly await the second in the series, it is a documentary for grown ups, brilliant.
Posted by George Anderson at 14:45