After a nice meal at the pub instead of a second game of War and Conquest I was taught how to dance by my granddaughter and lost at table tennis and Ticket to Ride, so earlyish to bed and up early to prepare the table for Bolt Action.

Playing in the Post Office is great for the room but with the open shop front it is a bit like playing in a goldfish bowl, every passer by pretends not to notice but all have a furtive look while their kids press their noses to the glass door. I then get quizzed on a Monday on what was happening.

No matter, it doesn't bother me in the least and one day a real wall will be up. So, my first home game of Bolt Action, 1,000 points a side, Germans vs British, Normandy. Apart from my infantry platoon I had gone for a mortar, MMG and a PIAT team backed up by an armoured car and a Cromwell, a little Bren Carrier would transport the MMG. Stewart had taken as support for his platoon, a medic, mortar and sniper along with a Marder III and a Pak40 anti/tank gun and tow.

It was to be a meeting engagement and I thought I would make my main effort on my left while occupying the buildings near the crossroads, the Germans wanted the crossroads but had a couple of squads opposite my left. As the game started nearly all my initiative dice came out first which was a bind as I had to make my mind up what I was doing without seeing what the Germans were doing, anyway I cautiously continued with my plan. 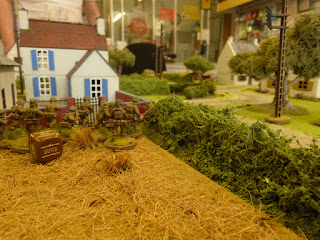 Stewart covered the crossroads with his Pak40 but I wasn't going to go near it, yet, the Humber armoured car hid behind a nearby house. 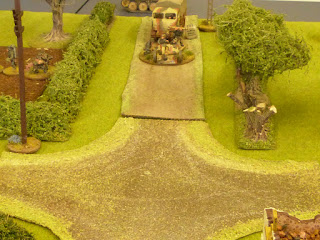 Then on rumbled the Marder, the same which took such punishment when I had taken it to the club last week, the German infantry spread across the battlefield 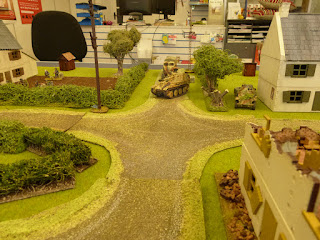 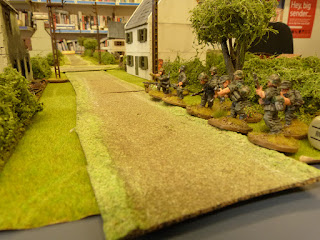 Now the bullets began to fly, the sniper made some good head shots and took out two NCO's while the Marder and Pak also managed some kills, my guys just ran for cover, the houses were just a tad too far for them to get inside comfortably in two moves. I eventually turned the mortar on the sniper but I may as well have thrown cotton wool at him. 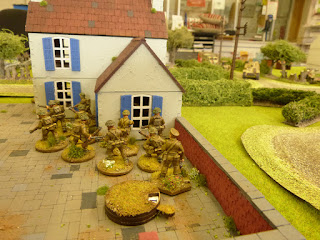 I now decided to throw caution to the wind, I moved my PIAT team up to pot the Marder, no, cotton wool again, it took its revenge on my Universal Carrier way down the road and took both it and my MMG team out, so much for plan A. My Humber had also fallen victim by this time, I had also moved it out to shoot at the Marder having got myself into a Marder frenzy and promptly lost this vehicle as well. 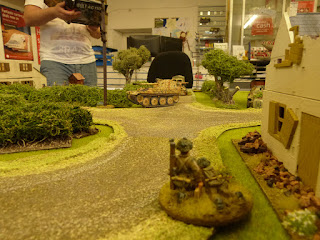 Now it was the turn of the Cromwell, feeling pressured having lost a squad at the crossroads to assaulting panzergrenadiers, I moved it to get a shot on the Marder, zoom, miss. 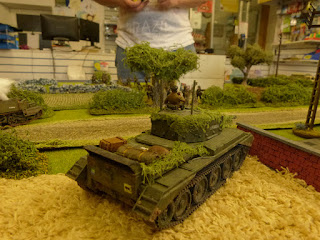 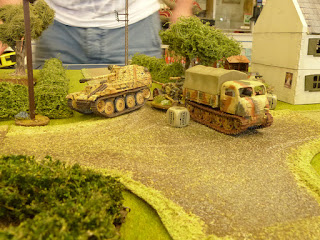 The Marder replied and stunned my crew, what was wrong with me this weekend the only luck I had was bad luck. I managed another shot and missed again, but so did the Marder, it was my turn to assault and when the dust settled I had knocked out a German squad but had lost another one of mine. The PIAT by now had taken three shots and missed with all of them, the German Panzerfausts turned out to be just as useless. As I looked over the battlefield at the carnage and the advancing Germans I threw the towel in and shook hands with Stewart, dejected I slumped in my chair and allowed my grandson to cheer me up as he informed me all the troops, buildings and tanks on the table were his "MINE!"

The game had reinforced my notion that I am a rubbish WWII player, despite enjoying myself, I really need to think things through and not get sidetracked trying to knock out one vehicle. We were surprised at how painful the assault mechanism is in Bolt Action. I have to say hand on my heart it bears no resemblance to reality, I know it's a game and not historical the way some WWII rules claim they are but it is bad.

I checked it out online and yes, we should not have let troops get within 6" to make the assault in the first place and I doubt either of us will let it happen again if we can help it, which is a good thing but does not excuse the fact it is a terrible mechanism, basically if you assault you wipe out the enemy squad, there may be the odd time you fail to do this but the odds on that happening are pretty daunting. I did learn more about the rules and we used the Season 3 house rules from the BoltAction.net team which were good, there are not many but they do fix some issues. The assaulting aside it was a good game and another learning experience for me, I look forward to another.

Posted by George Anderson at 12:08