Because of the school holidays I had the unusual chance to fight a wargame on my half day off from the Post Office. My son decided to pop over with my granddaughter and while she and Granny did girlie things we could have a good Dark Age bash, all the more appropriate as this would be the first time his army was fielded with all his own troops, no borrowing of my reluctant warriors.

We also decided to use 7x5 instead of the usual 6x4 and put more terrain on the table as much of it does not get used from one game to the next, so I set the table up and we diced for sides, I won and deployed where I thought I would benefit most. I had the same problem I had the last time I fought Stewart, I didn't have enough room and found a big wood in the way, so much for reading a battlefield, but the extra distance between us meant I did have time to get my line to form up properly. 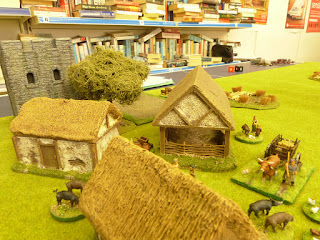 I went for out of my comfort zone for this battle and chose a list pertaining to what might be called late Romano-British based on forces around the time of Vortigern and his possible reliance on mercenaries. I decided to hire a bunch of Saxons, like the real guy, and got one excellent unit and one dodgy one, both had the small Saxon buckler and this would not help them against missile fire but would come into its own in melee. I knew there would not be a great many shooters turning up with the Carolingians so felt I could take this gamble, I also had to give them their own leader so I could only have one general for the British, another gamble. Vortigern brought some Comitatus troops, some Milites and a less than reliable Pedyt unit, I had some slingers but my main missile power came from a large troop of Sagittari, a new departure for me, they were expensive but I wanted to give them a shot, get it? I also took a small unit of cavalry which I hoped would be my reserve to perhaps be used more aggressively as skirmishers. The enemy had some really good infantry and at least one unit like my Pedyts, along with two blocks of cavalry, he didn't have a lot of firepower, with two medium sized sling and bow units


All our Dark Age armies end up fielding about the same amount of solid warbands with the differences being in the quality and the make up of the supporting troops. I had been beaten badly the game before so wanted to reclaim some honour.

I deployed with the archers holding my left, the idea being they would shoot anything coming close to bits and if they had to they would run from a charge, then came my battle line which would have to advance and make room for the centre, while my cavalry would indeed form skirmish and try and keep the enemy cavalry in javelin range but ready to bolt. The Carolingians formed a line of battle opposite my infantry and sure enough their cavalry would be making for my right, there was a fully formed warband opposite my archers so my plan would definitely be tested on that flank. 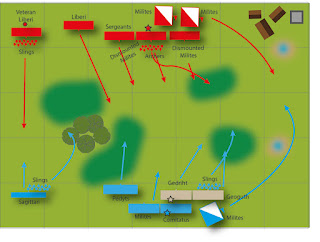 The battle began and sure enough the Carolingians marched confidently forward while I slowly adjusted my lines to allow room for all the fighting men to deploy. My plan for the left started to bear fruit and the arrows and slingshots began to take a deadly toll, the enemy slingers were the first to run and then casualties began to mount in the ranks of the advancing warband. On the right I had to pull back the Geoguth mercenaries as it looked like the enemy cavalry would get behind me, however my horsemen managed to keep out of their way and draw them into the corner where I managed to pin them, I lost my cavalry eventually but they had done their job, the right was safe. 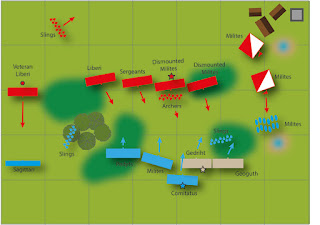 Now the action turned to the centre as the Carolingians smashed into my shield walls, I had forgot that my Saxons could also use shieldwall so they were unprepared but they were veteran fighters and outclassed any opposition on the field. Possibly with one exception, Stewart has a particular unit which has been mentioned before in my reports and it has only ever been beaten once before, even if the army flees these men don't, we all have a unit like that along with the ones we cannot ever trust, and I am always wary when I see their banner. In this battle my Comitatus were up against them, elite vs elite and my heart sank when my boys were well and truly thumped in the first round and lost their shieldwall bonus, they did however stand their ground. My men had caused fourteen casualties and ten were saved! The combats ground on and I was thinking ahead to when the Comitatus would run, I could see them going and at that time possibly the Carolingian cavalry getting in my rear. 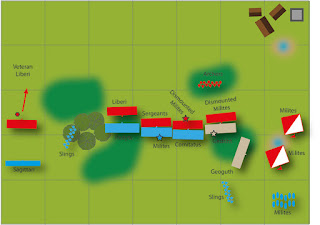 The second round saw the Gedriht earn their money along with my Milites they pushed back their foes, against the odds my Comitatus rallied and almost turned the tables, only narrowly losing the fight but again they held on. Stewart had by now given up on the flanks and hoped the fight would be decided in the centre and threw in his last unit. This time everyone except the Comitatus shattered the enemy and surged forward, the Comitatus not to be outdone actually managed to draw the combat against the devils guard. 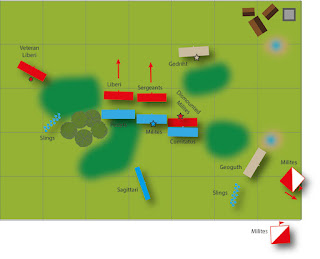 The battle was over, a decisive victory for my allied force against the now complete Frankish army, but at the end of the game both the Comitatus and the Carolingian elites were still locked in combat, neither giving way and both down to just over half a dozen men, the Frankish king had to be held up due to his wounds. Although the game was over we decided we could not leave it a draw for two units which had performed so well during the day, so we allowed them to fight on, both stood toe to toe for another incredible three moves, as the numbers dwindled my Comitatus did break, however they outdistanced their pursuers and ..... rallied! The position of both units at the end was such that Stewart's men were left facing the mass of British archers, alone, bloodied and with no hope. Real Dark Age heroism from both units and a great story to be retold over several beers for years to come.
Posted by George Anderson at 23:03