My son arrived in the early afternoon yesterday so although the table was up and ready I still had to deal with some customers before we could start, and of course I got more in yesterday afternoon than most Friday afternoons.

I explained the scenario and some of the rules as he has only played Bolt Action maybe twice before, defending he had three squads and a Panzer IV, his support was a StuG III, I matched this with my three squads and took an extra squad along with a Sherman and a Churchill, I had learned my lesson about bringing armour to the fight. I also added in a couple of armoured transports for each of us, just to make things look nice.

The preparatory bombardment went well and I pinned most of the German units and narrowly missed killing several, however most had recovered by the time I arrived anywhere near shooting distance. I brought the Churchill on first but kept it out of the way of the Panzer IV, the StuG was behind a building further up the village so I kept my powder dry. The assault gun however rumbled on to the road and fired on the Churchill, bang, one tank gone, the infantry looked around in dismay. I brought the Sherman in through the small orchard and took a shot at the StuG but the shell whizzed past into the far beyond. Stewart was being especially aggressive and on came the Panzer to get a long shot at the Sherman, and then there were none. That's that thought Cavendish. 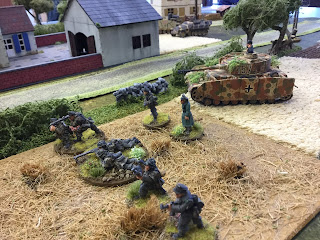 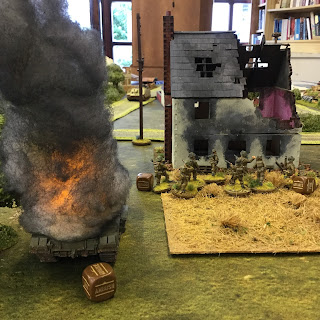 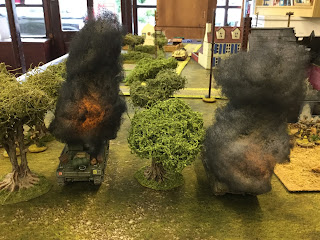 We actually had a chuckle at this turn of events, less than an hour of play and the British were going nowhere. We had us teas and returned for another look. I deduced that the Germans should not have had the Panzer IV, it had been part of the original line up and had been taken out during the last campaign turn, so, like infantry casualties it had gone and should not have been simply replaced. We also thought we should use the Chain of Command Patrol Phase and see if we could do away with the long march of the British from the table edge.

We duly started again and although the Germans still managed to get to their original defence line from the previous game the British were at least within shooting distance and it looked like a real game was in front of us. The shoe was on the other foot this time as the German tank (this time a Pz IV) went up in flames tout suite and the Germans also lost a squad to the Churchill's machine guns. A brave attempt to knock out one of the British tanks with a panzerfaust came to nought but his mates largely destroyed an infantry squad. As we looked at the wreckage from the second turn the Germans, with only one panzerfaust left, had no choice but to make a hasty retreat, game over. 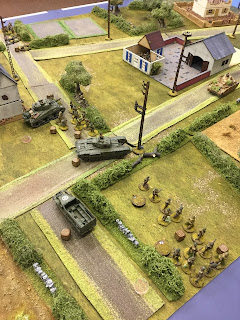 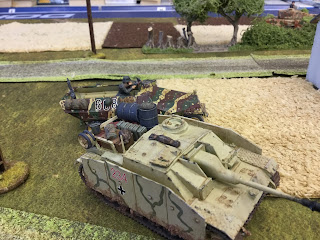 We both felt that the games had been very much an anti-climax and had somehow left us empty. The pendulum seems to have swung in favour of the British, although the infantry squads of both sides took further permanent losses the attackers can always rely on at least two tanks, and in the next game the British in theory could have three. German support options will again only allow them one armoured vehicle, perhaps I am wrong about the automatic replacing of the Panzer IV.

I might have to rethink this campaign but today is the big event which is kicking off early after a bacon sarnie or two, anyone want to bet on how many annoying customers turn up?
Posted by George Anderson at 07:45