I had hoped to get a few more troops than I did for 3,000 points, I ended up with two elite Gedriht units to which I attached my Cyning and Thegn, then some average troops with some Ceorls bringing up the rear, I also took some skirmishers, one unit of cavalry as a possible reserve and once again paid good money for Frank mercenaries, after all they had actually won their last combat so fingers and toes crossed. The Carolingians only showed up with two cavalry units despite the larger table, but they were large ones, the rest were some elites, some good infantry and a unit of fairly average troops, although the Saxons could in the main use shieldwall they lacked armour behind it.

We decided on a pitched battle between the forces and the deployment favoured me as Stewart had to basically deploy all his troops first, on seeing this I decided to lead with my left flank and centre and hold my right. This caught the enemy out and the Carolingian left was a long way from where the fighting was obviously going to happen. 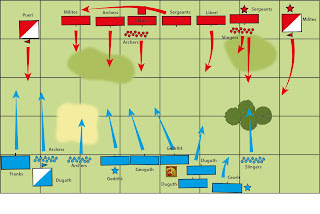 I won the initiative in the first few turns and Stewart lost several Strategy Intervention Points trying to get it off me, I managed to chase off his right flank cavalry but my pursuers didn't pursue far enough (twice) and caused a traffic jam which did not allow the Franks to fall on the enemy flank as I had envisaged. I attacked the centre with my Cyning and his bodyguard and although winning the melee did not win it decisively, it was at this point that the Carolingian archers raced downhill at my Geoguth unit, that surprised me, what was even worse was that they thumped the young warriors who only just held. 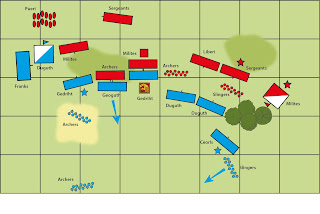 In hindsight the turning point of the game came when the archers routed the Geoguth in the second round of combat and punched a hole through my centre, both my units on either side were in combat and winning but not quick enough. I had also lost most of my skirmishers and my right began to suffer from volleys of javelins and slingshot, it did not help that one of my skirmish units blended in so well with the little hamlet that I completely forgot about them for two moves! I glanced at the dead pile and there were more Saxons on it than Carolingians, something was going wrong.

The Carolingian archers now turned and hit my brave Gedriht in the rear, and despite this the boys formed up around their king and fought with such ferocity they almost managed to turn the tables but the archers fought like Trojans. My second Gedriht unit defeated their opponents and one of those moments turned up, I could hit the enemy to their front with both the Gedriht and the Franks who were now in a position to do some damage or leave it to the Franks and turn on the survivors who had cut down the Cyning, they would not stand an attack by Gedriht. Yes, I chose to depend on those utterly useless Frenchies, and they were soon running for the hills.

My whole line now apart from a couple of units and some skirmishers had gone, the Carolingian left was almost untouched and I now had nothing on my left to stop the men who had seen off the Franks, my cavalry had chased off their opponents but it was tit for tat there and it suited the enemy more than me, I threw the towel in. 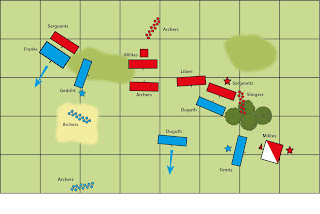 It was a great game but I made some mistakes, chief amongst which was relying on the damn Franks, the event which doomed me was the success of the Carolingian archers who were without a doubt the men of the match, close behind them came my Gedriht, who, charged in the rear, disordered and surrounded held out until they were cut down to a man.
Posted by George Anderson at 17:43