It is gorgeous outside this morning, it is warm, sunny and no wind, I can see way into the distance through the gap and the garage roof at Washington House has been completely reclaimed by nature and some bats I have been told, it is going to be a long, lazy Fathers Day.

As a country nothing seems to be going right for us at the moment just when we need to show solidarity, I am disturbed at the reactions to events from Brexit, through the Islamic attacks, the election and now Grenfell Tower. We seem to have lost our sense of reason, the government did not torch the tower, it was a horrific accident compounded by several factors the main one being the council doing what councils all over the country do, take the cheapest bid for a job and then the regulations are followed just enough to be legal. I also find it disgusting that people on all sides want to make political capital from the tragedy.

The youth are up in arms, they are bleating that they will not vote because the country has ignored them and, my favourite, we oldies are ruining their lives. However they seem to have managed to get out of bed, some, not all of course, during this election enticed by free everything and the promise of a land of milk and honey. I would vote for that but two things stop me, my natural cynicism and commonsense. I also wonder how, as I ply my trade shackled to a lifetime of paying tax which, to me seems to go straight to mostly undeserving causes, welfare, foreign aid, climate change and minority groups to name but a few, I am holding someone back from getting on with life.


The Yoof need to learn to be a vocal minority if they ever want to get somewhere and get that invulnerable 'victim' status.

And what are some of these students studying, well, Puppetry at the University of London, Jedi mind tricks in Belfast, Waste Management with Dance Northampton, David Beckham Studies Staffordshire, all walks of life crying out for graduates, no?

I won't leave higher education before leaving you with this beauty. Foreign rocket scientist graduates at Strathclyde University are defecating in the showers and in dustbins and rightly so the cleaners are up in arms. However, a memo for this to stop was withdrawn as it may have upset the students as perhaps in their own countries this quaint ritual was normal.


The words of the comedian Dick Emery's catch phrase "ooh, you are awful" came back to me the other week when I found myself with no sympathy for Diane Abbot's diabetes attack, you know, when you suffer memory loss in front of a microphone. I searched my own diabetes medicine leaflets to see if I had missed that particular side affect, but couldn't find it. And who would have thought the cure would be retaining your parliamentary seat.


Not only do we have on the cheap police, i.e. community officers, have you looked closely at this lot, should they be anywhere near a uniform, I digress, we are now getting cheap doctors. Yes plans are being mooted that people, not quite proper doctors, will now be recruited to cure you of your ailments, check your insurance.


I am not a fan of Tim Farron but any leader of the pointless Liberal Democrats deserves some sympathy and respect simply for taking the job. What he doesn't deserve is to be hounded out of the job because of his private beliefs, and beliefs with which I would lay money on are the same beliefs of the majority of people in this country. It is ludicrous that in a largely atheist country the man is being targeted for his religious stance, wouldn't happen if he was a member of a certain other religion.

What about the couple who don't eat, they were 'converted' to Breatharianism, whereby breathing and the power of, again, Universe or Earth Mother or some other hocum pocum is the only sustenance you need, oh, apart from a lettuce leaf or the odd piece of fruit three times a week. Or maybe it is fruitcake. And we look back at people worshipping stones and dunking women in village ponds with disdain.


And lastly here comes Schadenfreude again. On the island of Terceira they tie a bull to a rope then goad it mercilessly for fun, but last week one fun lover decided to film the whole thing on his iPad, but sadly he forgot how long the rope was. The bull did not and made its feelings abundantly clear as it tossed the guy around like a doll, he luckily managed to limp away, no doubt a very chastened gentleman. 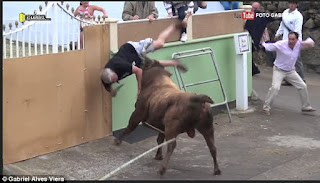 Posted by George Anderson at 09:31