Kevin and I fought our third battle for mastery of the Western world today outside the walls of Athens, the Greeks having been pushed back to their capital (yes I know Athens was not the only capital but play along). Having been beaten in the two previous battles the shape of the Greek army has changed, the temples have been looted and the rich forced to cough up to bring a mostly professional mercenary force to the field. As the Twelfth mustered for battle under their Legate they noted the daunting task before them.

Kevin turned up with an impressive force of elite mercenaries shielded by four skirmish units, most of the units were smaller than before as he wanted manoeuvrability and steel to crush my line of battle. I once again had left my heavy cavalry in camp but began to think I had made a mistake. I took three legionary cohorts and two auxiliary cohorts along with archers, some horse archers and my Lanciarii, I felt a little outclassed.

The deployment allowed me to form in the middle of the table, Kevin formed on the left of his side, I weighted my right hoping to chase away his skirmishers and get around the flank but the solid line of hoplites caught me unawares I thought I could at least get rid of the enemy and pin one or two units with missile fire which they couldn't ignore, the best laid plans etc. My left was going to try and outflank the Greek line and I put my best men there. The battlefield had two patches of uneven ground which I hoped would prove a bottleneck for the Greeks. 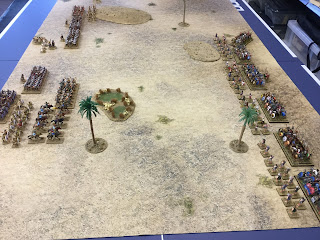 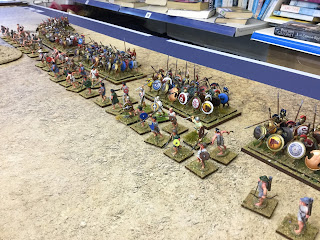 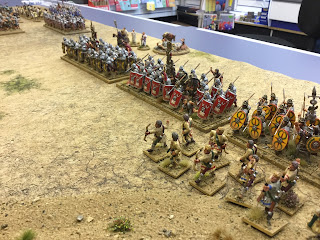 My right ended up in a real mess, my horse archers failed a charge and my Lanciarii were also routed while my massed archers only ever managed one kill, and on one occasion shot 24 arrows for no kills. I managed to get my routers back but Kevin's skirmishers had the best of me and soon both units had again run and this time did not come back. He also cottoned on fairly quick to start moving his phalanxes from the left to the centre. As per the plan my left advanced swiftly and Cohors II charged while Auxiliary Cohors I sneaked around the flank, I held the rest of the centre back. The mercenaries began to deal out some heavy casualties to Cohors II but the boys held out as men dropped in the ranks, I couldn't get the auxiliaries in due to opening up my ranks but as my men fell it opened up an opportunity and the hoplites were hit in the flank, this came none too soon and this. along with their dogged resistance, ensured the first hoplite rout. 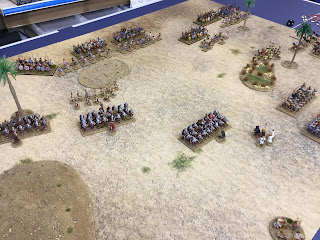 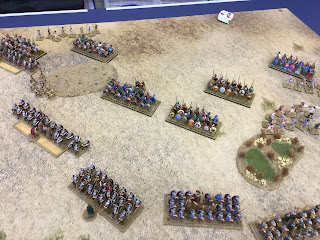 Kevin had now managed to get his line in a position to hit my centre, I really did think I was going to lose it, I had one unit of line legionaries, one of recruits and another auxiliary cohort holding the line, they were outmatched by their opposition. However as the lines clashed my men drew all the combats, I breathed a slight sigh of relief, but numbers would begin to tell in the next rounds. 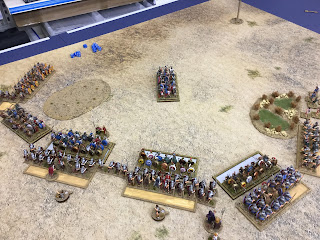 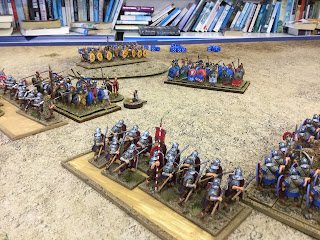 As the crises approached I had one spare unit on my right, the massed archers, I could try and chase the Greek skirmishers or I could throw them into battle to help the auxiliaries, I chose the latter, this sealed the fate of another hoplite unit which dispersed. The archers were now free to turn on their tormentors while the auxiliaries now careened into the open flank of another Greek unit sealing it's fate. On my left Cohors II had rallied and found themselves faced with an open flank as a mercenary unit chased away some Roman skirmishers and overextended itself, the opportunity was too good to miss despite my troops having suffered severe casualties, in they went and another Greek unit ran from the battlefield. Kevin had one unit desperately trying to conquer Cohors I who refused to run and one on its own to the rear with three Roman units now free to attack it. 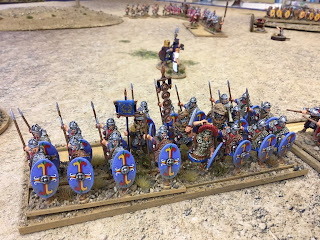 A great game and a tough slog for all, neither side gave quarter nor asked for it. At the beginning of the battle I went into whinge mode about the Phalanx rule but in the end it is part of the rules and I had to live with it. I fight with too many different people to start tinkering. Despite my moaning only one phalanx looked like winning and my boys held out for so long that the result would not have made any difference to the end game. Apart from my lousy shooting and the loss of most of my skirmish troops the Thunderbolts fought magnificently, legionaries and auxiliaries. By the time I get back from my hols Kevin will have Republican Romans and Carthaginians ready, I am looking forward to that.

Posted by George Anderson at 22:03