Mid way through September now and back at sea, our only visit apart from Bahrain after Karachi was Sharjah one of the United Arab Emirates and where we had an Army and RAF base. We had a very raucous run ashore at the local NAAFI bar where our resident Tartar 'pop group' played, two of the members were from the RO's mess or at least Chris Short was, the drummer if I recall. There was nothing else of interest in Sharjah and the trip was quickly over and forgotten.

Next we visited Doha in the state of Qatar, Doha was very much on the way up back in 1970, a new airport was being built along with a road programme and the ruler was considered 'progressive', or as much as such a ruler can be. This visit was much quieter than Sharjah, there was no alcohol to be had at all, so with only sporting activities to be had we RO's had a pretty boring visit. The place is very much different now of course and I visited it some years back when my son lived there, who would have thought. 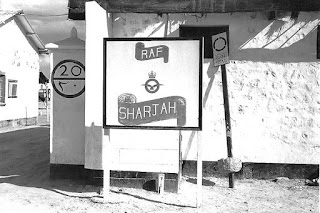 A quick weekend in Bahrain and back to sea, this time with two American ships, USS Noa and USS Power, both these ships were Gearing class destroyers built during and after WWII. The Yanks had one more ship in Bahrain, I cannot remember its name but it was quite often tied up alongside us, it was some kind of patrol ship and was ancient, it reminded me of the vessel from the film 'The Sand Pebbles'. It also had an open quadruple AA gun on the front and stencilled in big letters along the shield was 'MAN KILLER', I always had the urge to add 'eventually.'

I had a personal encounter with our Allies while in Bahrain. Coming out of a restaurant we frequented, a more down market establishment than the Moons Plaza but nearer and cheaper, my oppos Keith Wilman and Mick D’Cruz tried to enlighten a drunk Yank that he was paying too much for his taxi back to base, the Yank took offense and a yelling match started. It was too much for me and the Yanks companion, a very large black man and we both held back resignedly. Keith ignored my advice that he let the guy pay over the odds and wanted to help him despite himself, a bit of shoving now ensued and I heard the fatal words uttered by Mick "I'm with you Keith." In the time it took me to roll my eyes, turn around and look back, both my mates were on the deck bleeding profusely from their noses, the very large black American standing over them, he came at me as I stood transfixed and in shock and I thought my time had come. He raised his arm, looked into my eyes, shrugged, dragged his drunken mate into the taxi and left. I could only pick my mates up, cart them into a taxi, pay the proper fare, and get them back onboard, one clean white shirt and two red ones.

Anyway we exercised all over the place with the two destroyers, popping back to Bahrain for the evening then out again to meet the RAF and a couple of Hawker Hunters doing fake strafing runs on us, it may be an old aircraft but they were pretty sharp when attacking us. We will be returning to Bahrain on the 18th for several weeks for a maintenance period. Pretty much a nice break for us RO's, maybe a bit of work on the flagdeck helping out the Buntings but you can't do very much maintenance on radios when all you do is use them, not fix them. I pity the poor stokers and seamen, no, I don't.
Note: Mick became an officer and a gentleman and had a successful career, Dave a meat inspector in New Zealand, looks after posh peoples houses now and no idea where Lofty is.

Posted by George Anderson at 09:17