Despite the dire warnings given out with glee by the weather people about 'Storm' Aileen I braved the rain to take the Twelfth to the club for my last game before the holiday, I was fighting Ryan's Successors with longer sharp sticks than Kevin's hoplites. They are not painted yet as he is a busy young man and not an old lag with more time than he knows what to do with, however he does have all the troops in his plastic mountain. Hence the maps as his army resembles the Unsullied at the moment.

I actually got a fairly well balanced army for 2,000 points, Early Imperial Romans have some great choices for troop types and it is a tough army. I knew Ryan had cavalry this time so did not feel guilty about bringing some cataphracts, I also took bolt shooters and massed archers in fear of his elephant. It may be boring but it is about the only valid tactic for fighting a phalanx army so I again went for the flanks, I was helped in this as Ryan threw his Elephant and Companions straight at my line. The Lanciarii dodged and my cataphracts countercharged, the Companions narrowly missed a lovely hit by a Scorpio, they saved them all, but they were no match for my cavalry and were soon dispersed. 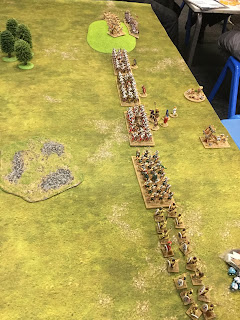 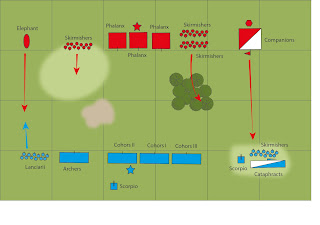 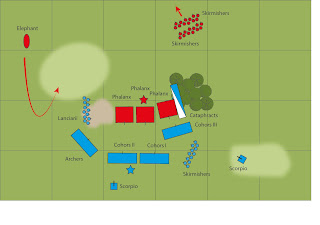 As the cataphracts positioned for a roll up of the Successor flank the elephant on the other side started to receive a hail of fire from javelins, arrows and bolts, it screamed in pain and went amuk, luckily for both of us away from our lines, the beast therefore crashed out of the battle. My missile troops now turned their attention on the advancing phalanxes.

My cavalry now drove into the flank of one of the phalanxes, while a cohort moved up to support, the writing was on the wall and Ryan conceded. Ryan was rushed into this game and if he had turned up earlier he may have thought more about his deployment, having fought with the Thunderbolts now for several weeks I am very comfortable with them.

Elsewhere we had two boardgames and some of the lads having a run through with Bolt Action. That's it now for about three weeks wargaming wise, the last part of the year promises more action as Kevin sorts out his Republican Romans and Carthaginians while Ryan is determined to grab a paintbrush and work on tactics. As for the Twelfth, bring it on!

Posted by George Anderson at 11:22