In order to give Kevin a break and allow his hard pressed Greeks some rest and recuperation we played Bolt Action today. I pulled a nice little scenario from the WWPD website, something easy as Kevin is completely new to this kind of wargame and we all know BA can have its moments.

The table was set up with an objective marker smack dab in the middle, we each then placed a marker in our own table quadrant, you did not get any points for your own marker but one if you held the centre and two if you captured the enemy marker. Two units were deployed on table while half of the rest turned up on turn one and the others from turn 2, I decided to at least try and take the enemy marker while moving on the centre, these troops could always fall back and defend if needed. For some daft reason I put my Achilles and my Humber armoured car on the opposite flank from where I planned to attack. 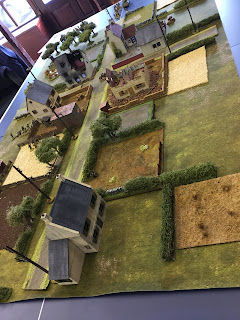 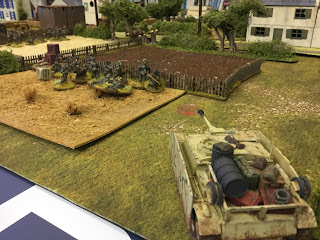 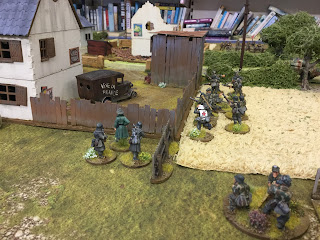 The Germans were more concentrated and looked like putting most of their troops in the centre, these were supported by a Panzer IV while a Stug III lurked around the German marker, between the two sat a SdKfz 222 light armoured car. 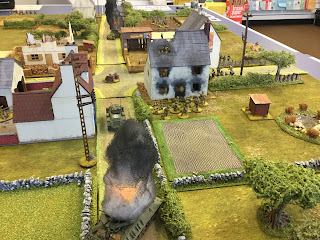 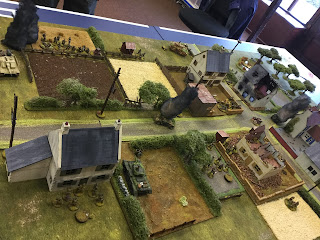 I had a plan to cover the Stug with smoke to enable my Cromwell to advance to the road and machine gun the German infantry, however this took a lot longer than expected. On my right I put the Achilles on the road and opened a dual with the Panzer, I managed a hit but only immobilised the brute, but this was fine as it could not train its weapons on the crossroads. Sadly it did manage to knock out the Achilles with return fire before I could pull it into cover. Around the same time the 222 attempted to scoot along the road towards my infantry, on exposing itself it took a round which started a fire, the crew managed to put this out just as a second round blew it to smithereens. 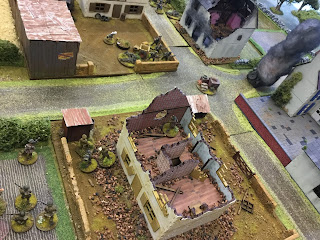 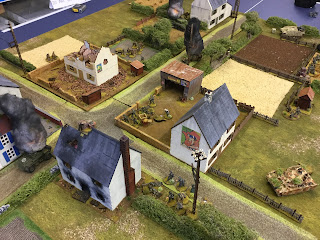 Things were looking up, my smoke had at last turned up and the Stug was forced to move, the Cromwell fired but the shell bounced off, the return fire did not bounce off and the Cromwell went up in flames. Now the German mortar turned on my infantry approaching the centre with accurate fire which devastated one of my squads, they in turn decided not to continue their advance. A second squad had put itself in harms way and was taking a toll of an enemy squad when the Germans got the drop on them and horrendous casualties caused them to disperse. 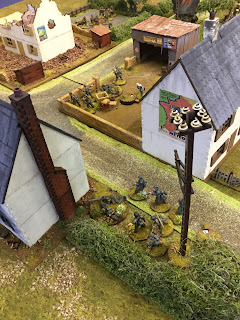 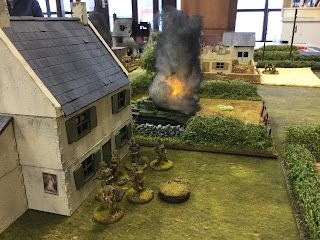 The German infantry could now claim the crossroads and my troops were far to shaken up to prevent it, my remaining forces on the left were stuck in a house and under fire from the Stug, with all my armour gone and my infantry in no fit state to continue it was time to withdraw. I forgot to mention, my Humber moved on the crossroads only to fall victim to a Panzerfaust shot, for a couple of turns the German shooting was highly annoying to say the least.

So there you have it, a good game and one which the British will have to come back to in order to push Jerry further inland, a nice win for Kevin after suffering at the hands of the Thunderbolts for so long. I added a bit more armour to the forces than is normal for a small BA game but what's the point of having the models if you never use them? We have a game of Tricorne on Monday, Freeman's Farm, then another Greek v Roman clash next Saturday.
Posted by George Anderson at 20:51