Everything but the kitchen sink!

Big game yesterday 3,500 points, Kevin and I both agree that to get the real flavour of the armies we were using it needs to be a large battle, I could do with around 5,000 to be really happy but I don't think that will happen any time soon.

Anyway, another beautiful day and we were inside playing with wee sojers, people walking by must have thought we were mad, I had a large fan on and the door slightly ajar for some air, but there wasn't a lot around yesterday. I took three phalanxes supported by Peltasts and Thureophoroi with back up from my Galatians and some cavalry, I was really hoping the Peltasts and Cataphracts would be the cutting edge of my forces along with the Galatians. I also took an elephant a bolt shooter and a scythed chariot all with the intention of ruining the Carthaginians day. The enemy surprisingly took no cavalry but did have two elephants and two bolt shooters, the infantry were fairly typical with a large number of African spearmen, and sundry allies.

Looking at the field after deployment I saw an opportunity on my left to push the Peltasts forward, beat the Italians and then roll up the line with the cataphracts, on my right however I could see trouble ahead, it was very weak compared to what was on the opposite side and I decided to try and keep out of combat for as long as possible here. 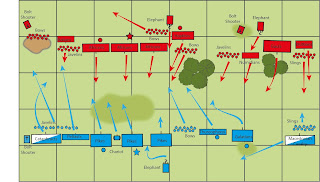 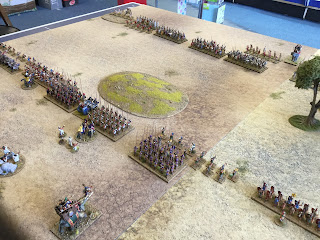 My left and the enemy right advanced then stopped, I don't know why the Carthaginians stopped but I was waiting to destroy their extreme right, the enemy left came on slowly. To my horror the elite mercenary Peltasts were beaten by the small bunch of rural Italians, I made a note to find out if they had been paid, this in turn carried away the cataphracts, it was all going wrong. 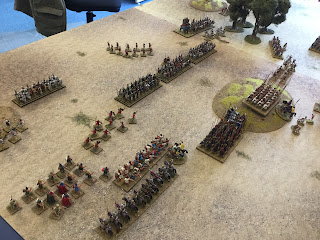 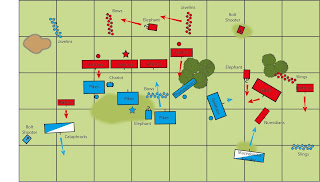 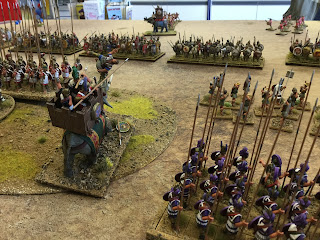 I had now managed to get rid of several enemy skirmish units and others had withdrawn, the Carthaginians seemed a bit confused on their left and I managed to catch the Numidians in the flank and rout them, I then brought the cavalry back to a better position. The Galatians had crashed into the large Gaul warband and were happily cutting them to pieces, unfortunately they were Resilient and held on, just. The enemy elephant on this flank had somehow got past the fighting Gauls, possibly heading for my cavalry but it was now taking a lot of missile fire, to my chagrin I didn't kill it and it went amok, right into my Galatians, a worse outcome you could not dream of. My boys killed it but took horrendous casualties and then began to lose their melee, I think their heart had gone out of the battle as they never recovered from the disaster and routed. No shame. 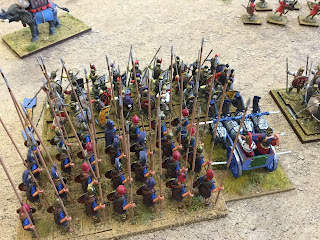 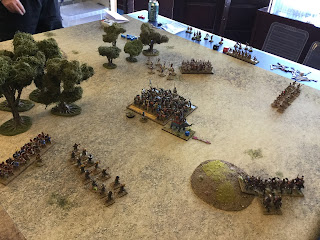 Meanwhile in the centre my Red phalanx and the chariot had destroyed an African unit, the White Shields held another and the and the Purple shields cut through the third, the cataphracts had rallied and countercharged the cheeky Italians who instead of running held them off for the rest of the battle, grrrr. The centre was mine, on my right despite having lost the Galatians and the Thureophoroi being in a very bad position I had cavalry to threaten the Gual's flank and the Purple shields about to turn and take the Hoplites in the rear, the poor Bruttians were still playing catch with my slingers. 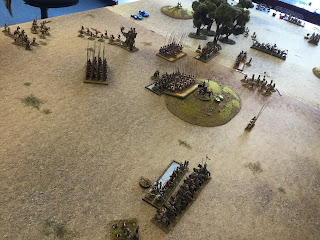 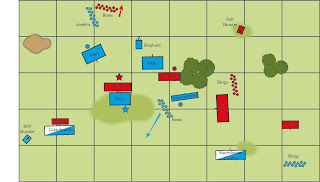 So there you go, my first 3,500 point battle and I had survived, I was extremely disappointed in my Peltasts and cataphracts from whom I had expected great things, I don't know why but none of my cavalry, no matter the army, ever seem to be on top of their game. I really felt for my Galatians who had put in a sterling effort as usual only to be defeated due to my own archers and slingers causing the beast to run mad.

Posted by George Anderson at 12:56