We played Zombicide at the club last night, it's been a long time since I played the game and it's a shame because it is good fun. We had the Prison Break edition and as with most scenarios we had to get into the prison, take over a control room and open further doors to enable us to get our objectives. We managed to slaughter a heap of the Walking Dead and got all the tokens apart from one which was in a section of it's own with a really large nasty zombie. Time was approaching the witching hour but Simon was not keen to let the last token go, so we stormed through the last moves, we managed to kill off all the 'normal' undead apart from the monster. We backed up and searched frantically for a weapon which would kill it, we really were on the clock. One brave soul tried but got trapped in the room just as we found the means to build a Molotov Cocktail, it was him or us, so he bit the dust along with the monster as we finally collected the last token and fled the scene. 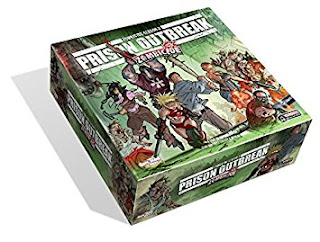 The time had passed surprisingly quickly, elsewhere we had Bloodbowl, a large boardgame and a Chain of Command game, Italians vs Americans, I heard several curses coming from the Americans during the evening. Muskets and Tomahawks next week.

I have finished all my latest map projects and still await authors comments, I know there are a couple of projects coming my way but they haven't turned up yet. So I am spending my time forcing myself to relax, I am reading Ian Ross' "Twilight of Empire" series set around the rise of the Emperor Constantine and thoroughly enjoying it, the good news is I have two more books to go and have picked them all up very cheaply second hand on Amazon. 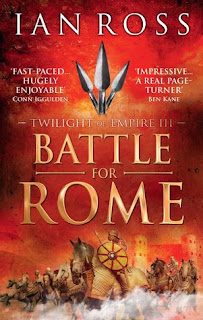 No new cavalry from Aventine yet so as I am halfway through the first of my SYW units I jumped in and ordered up a French battalion yesterday morning. I am getting an urge to add some more troops to the Twelfth and the Patricians, perhaps it is the effect of the Roman themed books, I do think however that the latter could do with another Legion, I have plenty of barbarian types which I can add as allies. As for the Twelfth I feel they need another heavy infantry cohort, these may just be itches needing scratched but they are now really bugging me.

Talking about delivery I find I have no patience if an order doesn't turn up after about a week, I see no reason why the odd item should take two to three weeks. I get despatch details from Amazon and wonder why the book doesn't turn up within the next three days (second class) but usually takes about ten days, why? When it does turn up it normally does have second class postage on it, so why ten bleeding days! Most wargame firms are now thankfully very good at getting stuff out, Foundry are one of the best, you can order late in an afternoon and the troops turn up the next day, amazing. I also find Aventine, Footsore and now Front Rank all great with decent turnarounds. I ordered the French yesterday morning and they are now in the post.


So, nearly lunchtime and a BLT, this afternoon I may venture to the pub after some painting, my old drinking buddy is too infirm to get out at the moment and he hasn't managed now for about four weeks which is a shame as I think he relies on me putting the world to rights in under an hour and a half.

Posted by George Anderson at 11:51