Not Romans, but Seleucids, OK a couple of Romans

I have just this afternoon put the finishing touches to my new Line Cataphracts for my Seleucids, I bought a unit deal, twelve figures and horses, the new large horses, from Aventine, a joy to paint and very nicely detailed. They are mostly armour which is no problem for me as I, like most wargamers, hate painting horses, so just legs, ears and a tail for this lot. These were going to be Agema cataphracts but I have no patience to wait for them hence the Line figures, and if I ever got around to fielding Agema and some Companions for War and Conquest the second of my two figure army would have to be on foot as I could not afford the points for his horse. Joking aside these should be a welcome addition to the Seleucids, now I just have to see if their new dice are up to it. 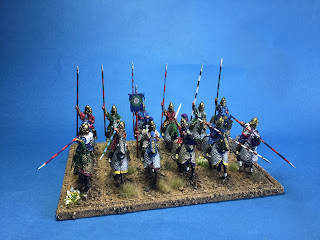 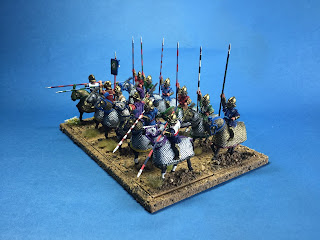 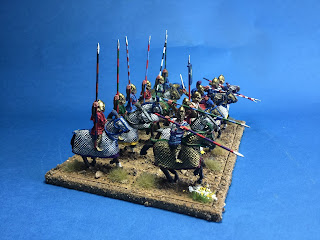 I have also added another couple of Roman officers to the Thunderbolts as they will be getting new recruits before the year is up. 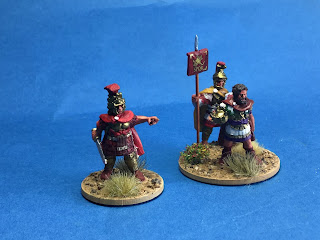 I have had to do a bit of surfing this week, with the planned new units I would need steel paper for the movement trays, Coritani, where I normally get my stuff no longer sell .02 sheets which would mean any new units would stand proud  from the rest of the army. After several hours of dismissing .04, .05 and .08 sheets I managed to find some .02, this is not sticky and will have to be glued to the trays but that should not present a problem, naturally they were more expensive than Coritani used to be. Just as I hit the Paypal button I realised my son might have odd sheets lying around from his Carolingians, duh, yes he has, grrrrrrrr.

I took delivery of my latest Front Rank SYW troops today, a French battalion this time in a lovely firing pose, I hope to get these cleaned up and primed by the end of the day.

I opened my iPad yesterday to find Safari looking for 'short haircuts for women over 50', the last straw, it was time to divorce our iPads, to be fair the missus was not best pleased when the like of 'Roman Legions in Mesopotamia' pops up. It has taken several hours and two phone calls to stop them communicating, a lawyer would not have been cheaper but maybe faster. I now have to tell my iPhone it has a new partner as well, it never ends. How can TV people break into high security computers in about 30 seconds when I cannot get into my own accounts without renewing my password?
Posted by George Anderson at 16:12