Club night and Bolt Action, a very dreich night too, cold and miserable but we can't complain it has been an excellent year weather wise. Rob brought his Para's and an Arnhem scenario, a British blocking force is attempting to slow down a German push against the main Para position, at first the Germans only have infantry, as the game progresses the German forces begin to build up with armour arriving.

Rob was the Para's with Simon and I having the Germans between us, we had to capture the roads leading off the table, there were three, two houses dominated the central area and the Para's had claimed these and were happy to sit in them, a couple of other squads held the extreme flanks. It looked like we could overwhelm one flank and then attack the houses, Simon sent his halftracks racing up the road into the British position, the first was hit by a PIAT and burst into flames as the passengers disembarked to hug the ground. I was a little more cautious and approached through a large cornfield.


All hell let loose on Simon's men stuck in the road and they began to suffer quite badly as a flamethrower also targeted them. I now rushed my troops into the wood in order to take the pressure off but I was less than successful, the Para squad in the wood hunkered down and refused to break. One of our squads in the road now routed and dispersed, the other from the lead halftrack preferred to keep their heads down. We eventually took out the menacing flamethrower but it had distracted us from finishing off the squad in the wood, a sniper was also starting to become annoying. We dispatched a squad to sort this nuisance out.

German morale was not good as time after time our men refused to fire or move and simply went to ground, the frustration must have got to Simon as he flung a newly arrived squad at one of the houses in a ferocious assault, sadly his men met stalwart resistance and again our men routed and dispersed. It was proving very tough to kill the Para's. We now brought up a mortar and although it missed we began to wear down the defenders, we now got a Panther and a flak halftrack the British received some help from the Dutch Resistance (these included the cast of Where Eagles Dare). A Para jeep had also turned up and held us off from the only road we had a chance of grabbing, I shouted orders and curses at Simon's men in the road but they would not rise up and challenge the jeep. The armour arrived too late as time was up, the Para's had held us off magnificently, despite Rob's at times lousy die throws against my troops, he had no problem killing Simon's for some reason.

A good game and we managed around six turns with quite a lot of men, the Para squad in the wood which had looked so vulnerable with four German squads approaching ruined our plan and fought us to a standstill.

I never really took to Napoleonics despite being a Napoleon fan, one reason even back when I had good eyesight was the intricacies of Napoleonic uniforms, not for me thought I, I now realise I have turned to a period with possibly even more intricate uniforms. I have just finished my first artillery crews and guns for my Seven Years War project, the French were not so bad but the British gunners are very much peacocks in uniform, gunners for heaven's sake. As you know I did not use the overly large original British crews but decided I could not lose even more money so kept the smaller, thinner French crews, they fit in fine but I will go with all Front Rank crews in future, I am unsure whether to stay with Eagle Figures guns, which are very nice or again simply go with Front Rank.


I have also completed two officers at brigade level, one British and one French, as far as I can ascertain these guys either wore their regimental uniform or whatever they pleased although the French had rules for senior officers. 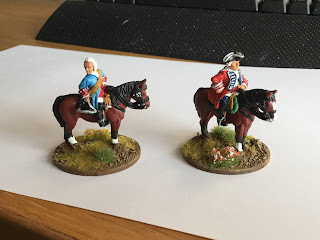 I got some foot officers from Wargames Foundry some time ago and they were huge I took a chance on some of their SYW cavalry thinking that they would not be as big as they were on horses, although Front Rank do a mounted grenadier figure wearing a mitre there was no standard bearer or officer while Foundry did the lot. It really was a long shot at around £50 but it paid off, the cavalry are fine and will work well alongside Front Rank, they are a tad chunkier but I don't mind that, they are going to be the 2nd North British Dragoons (Scots Greys) and whither by design or not they have really miserable faces. The standard bearer has a really weird club looking design at the bottom of the pole, no idea what that is about. I have yet to prime the French cavalry but they are all cleaned up and ready to go.

Posted by George Anderson at 12:12