I am doing well with posts just now, this is due to the amount of spare time I have on my hands at the minute, I am now up to date with maps and the Atlas author is incommunicado until the end of November so I am not expecting anything for that soon and with the festive season nearly upon us I do not expect things to warm up until into the New Year. The pressure is also off wargaming wise as I now only have the SYW project to work on and that was always going to be a long term thing, especially cost wise as infantry battalions are coming in at an average of £36 and cavalry close to £50.

I have always wanted to see a couple of my interests made into a movie or television series, the life of Robert Bruce and the Wars of the Roses, these in my opinion are crying out for the large or small screen. Well the former is now on celluloid (yes I know it is not used anymore) and I have watched it what did I think? I am notoriously hard to please with films etc. but I sat down to this (it's on Netflix) with an open mind and apart from one glaring piece of nonsense I was quite pleased historically and more or less happy with the script which was fine if not inspiring. 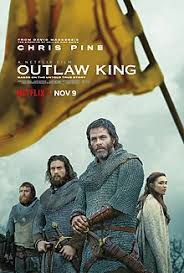 I think the murder of John Comyn deserved more attention, I have seen worse spats in the school playground. The crowning of Bruce by Isabella MacDuff was a nice touch and the storyline followed real life very well after that, we got the battle of Methven, the attack of the MacDougall's and James Douglas carrying out his raid that was then known as the 'Douglas Larder'. Throughout all this the eagle eyed would have picked up on the heraldry shown, this too was spot on, which begs the question of why they showed the Douglas background as all blue instead of only the chief (the band at the top of the shield). A minor moan. I cannot say anything about the climactic battle at the end as this may spoil it for you but I will say it starts off well and then of course disintegrates into the one on one melee all medieval and ancient movie battles end up as, thankfully we do not get the mad, disorganized run at the enemy which passes for tactics in Hollywood. Oh, and we did get the flaming arrows at one point, again a staple of movie directors but completely useless in real life.

What didn't I like, well the main sticking point for me was the characterisation of Edward Prince of Wales and the next king, the actor was not convincing and he had a ridiculous bowl haircut which was not de rigueur for another hundred years, think Henry V. The English raise the 'Dragon' flag to signal no mercy to the Scots, I have never in my life heard of such a thing, the otherwise great king Edward I was totally unhinged when it came to his hatred for the Scots, the nobility especially hence his murder of many of them, including Bruce's brothers when normally they would have been held for ransom, a fantasy flag/idea was not needed.

So, all in all not a bad effort and brownie points for sticking in the main to the real story, only spoiled by their treatment of Edward II and at times a lacklustre script.