A Puff of Smoke

As you know I have gone back and took another look at Chain of Command, also, as usual I have jumped in with two feet. I sorted out patrol makers and tactical markers last week, I have also searched out a QRS and other information pertaining to playing the game and stats on the weapons, all printed and laminated of course, oh, and I also bought the rules. Like a madman I am also on the cusp of buying some Russian campaigns although I do not even have Russians, I already have one.

When playing Stuart last week I managed eventually to plonk some smoke down, we had to use some small cotton wool tufts which we had to imagine were 3" in diameter. This of course wouldn't do for Casa Anderson, I sent off for some cushion material, not expensive but I was a bit surprised at the size of the bag, at the same time I got some 3" round bases from Warbases. I have a can of spray carpet glue and simply sprayed the bases with this and stuck a handful of the cushion material on, another spray and I whacked on some more, you can't tease this stuff out too much as it breaks up easily, the spray glue however held it well. Once everything had glued I gave them all a 'haircut', this still leaves fairly big blobs but the actual base is 3" so there should be no argument where the actual smoke is. Too finish I gave them a light spray of Citadel Grey Seer primer, just to take the white edge off. This leaves explosions to do for barrages, I have some bases in the MDF pile, cocktail and BBQ sticks with the clump foliage needed on the way, perhaps another half dozen of these. 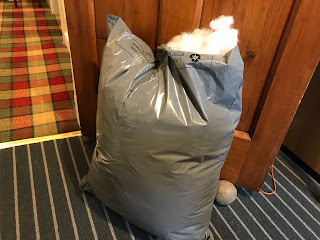 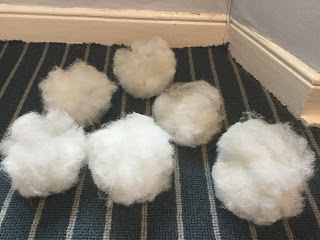 Also completed today was some scatter terrain for the SYW and one piece for WWII along with a British artillery ammunition wagon, I used blue contrast paint on the peasant, I am very impressed with the Talassar Blue. 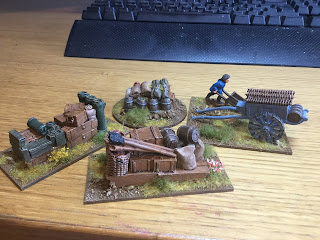 I have my small farm based, so I need to paint that and grass it next, after that I will be looking at rebasing some farmyard animals if I can get them off their bases and looking at doing some stowage for my WWII vehicles during the upcoming week, a short week as I have a game on Thursday and we are off south for the weekend. I have my Tiger Moth flight next Sunday, the Tartan Baron.

Posted by George Anderson at 15:30