End of a Saga

Another Saga game last night at the club, as the Saxon lord I was being invaded by Alex's Carolingians, at least I didn't have the Byzantines. After the preliminaries to win the game we had to kill the opposing leader, fair enough. I had thought the Saxons would have the option for javelin armed levy, but no, all bows, these have been completely useless in my battles so far and very often do not even get to loose a volley.

Alex did not do anything in the first round apart from load up his 'board' for the coming battle, the Carolingians have a certain Saga thing, along with others armies, which can give them a large advantage in battle but it needs three dice. This suited me as I managed at last to move and shoot my archers, they dealt out death from above to the Carolingian Warriors, five out of eight hit the deck, great start. 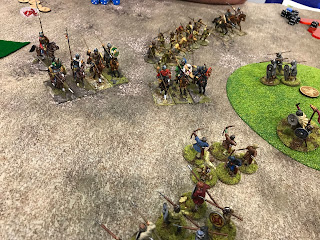 Alex responded by charging the archers, these guys bravely held off the Hearthguard by not dying in droves but merely retreated a short distance. There now followed some back and forth fighting which resulted in more horrendous Carolingian losses and one of my small Hearthguard units being wiped out. I was still in a good place, Alex was having a dice crises and I almost felt sorry for him, but I have had it rough myself for the past several games. Things now came down to an even fight between both Warlords, what the hell we decided to end things one way or another, Alex won by one hit, my man fell with a mortal wound, the game was over.

We then had a chat about the game, Alex has played the first edition but is not keen on the second, for me I am sure it is great as a game but it does not have any real historical flavour and the differences in the armies feels contrived simply to be different rather than being based on historical precedents. So it's a no from me Simon. If it is possible and I am not required to keep the numbers up I will resign from the campaign, I don't like doing it but my heart is not in it.

Elsewhere we had Age of Sigmar, a boardgame and a Battlegroup WWII game with Andy's excellent 20mm collection, every time I see this I wish I had gone for 20mm. His Waffen SS despite the size also look better than mine, great work. I was pleasantly surprised to see two King Tigers on the table, I will get the Rubicon one when it makes it to the shops. 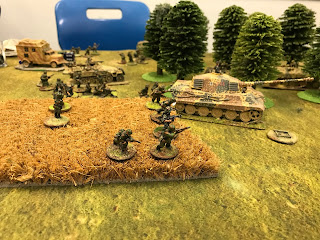 My stowage and other stuff arrived this afternoon from Debris of War, so I have plenty to do over the next few weeks before buying more troops. 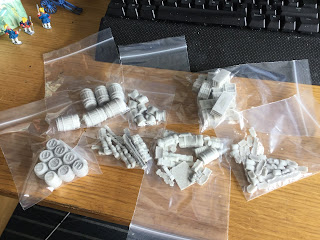 I have now picked up the book I bought recently on the AWI, it is well written and easy to read, I also now understand the beginnings of the war (militarily) far better than I did before. Bunker Hill (Breed's Hill) was a disaster for the British and a pointless battle, I used to think we got something out of it but we didn't. We were cooped up in Boston without a clue what to do, at least so far, the initial commanders have just been relieved so maybe things will improve, don't spoil it for me. 'The British are Coming' by Rick Atkinson, I recommend it.